This week has not been all fun and games. I’ve felt challenged and tested and that old feeling of college finals week tinged with anxiety returned. First it was getting comfortable and confident with the glider. Then it was getting approved for solo. Next was passing the oral test on systems, technology, and procedures. And last would be the check ride for certification.

Each day by the time I got back to my motel room, I could easily have crawled into bed and slept, but instead, had to study my flight manuals. Glider systems with names like Variometer, Mac Cready rings, Capacitor flasks, and Reference chambers, are not a nomenclature with which I’m familiar. And then throw in weather charts with their Thermal Indexes, Skew-T charts, and adiabatical rates, adds another language to learn, let alone understand. Of course, flight procedures add another even larger volume of important things to know. Whew.

In the morning of the fifth I flew those additional six solo flights. That completed that requirement of ten solos before the flight test. Andrew and I then sequestered ourselves off in a back office to review the oral exam. Tomorrow, Wednesday, he and I will fly together practicing the check ride maneuvers I’ll be expected to demonstrate to the flight examiner. Rick Kohler, Sundance’s owner, will be the check pilot. I feel like I have a good relationship with Rick, but he let me know that something like failing to do clearing turns prior to rolling into a bank is grounds for failure.

So, it has been something of an anxious week. If Thursday ends successfully, I’ll be ready to head off for Indiana Friday morning.

It hasn’t been all work and no play. My drive to Madrid a couple days ago was fun. And this afternoon, thunderstorms moved over Moriarty cancelling afternoon flights. As mentioned before, this town has a reputation as the soaring capital and has a large and impressive glider museum. I took advantage of the afternoon break to tour the museum. What an extensive collection of both contemporary and antique gliders it has. The U.S. no longer has a glider/sailplane manufacturer, but it did at one time and many of those planes are on display. Also in the museum are a variety of German, Hungarian, British, and Swiss manufactured gliders. 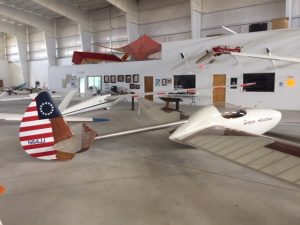 The museum docent is part of a Search & Rescue team and he was one of the persons to find the pilot killed the other day. He said the glider went down at 4:00 in the afternoon and they didn’t locate it until 11:00 that night. The glider didn’t have an Emergency Locator Transmitter and the pilot hadn’t radioed prior to the crash. He was found by tracing cell phone information.

The docent said the pilot made a difficult landing in a small area, so he must have been conscious when he landed. There wasn’t much damage to the glider, but it impacted a fence post and the pilot’s head cracked the canopy. It was the docent’s guess that it was the head blow that did him in. What a sad accident.

Phooey! What a bummer.

I was really looking forward to my check ride this day and getting my glider certification. After studying in my motel room every night, I was so confident of passing the flight check that this night I planned to go out and celebrate at the local brew pub.

This morning, when checking in with Rick, the flight examiner, the first thing he noticed was that my pilot’s license was not current. Guess I should have seen it still had my Columbus address. But that might have been gotten around. The big thing was that two weeks ago when the check pilot in Bloomington did my BFR in the powered airplane (Biannual Flight Review), he did not complete the endorsement properly.

Rick, the N.M. check pilot, felt bad about it and felt somewhat responsible that Andrew hadn’t checked those items early in the week. But Rick said he couldn’t do the check flight and risk his own license by ignoring FAA regs. Darn, darn, darn.

All is not lost; I made 40 glider flights, logged 13.0 flight hours, completed the training, did my required solos, and got the endorsement to do the check ride. Now it’s just a matter of getting the Indiana flight instructor to correct his error, send for a replacement current pilot’s license, and schedule a glider check ride in Indiana.

I didn’t go to the brew pub, just packed my bags and headed 1300 miles down the road to Bloomington, Indiana.

Phooey! Nothing’s easy. What a disappointment.

Rick called me the next day while I was driving home to say how sorry he was. He said if I was willing to fly back to Moriarty, he would do the check ride and not charge me for the tow, the glider time or for his time. That was very generous of him.

And I may give it some consideration. 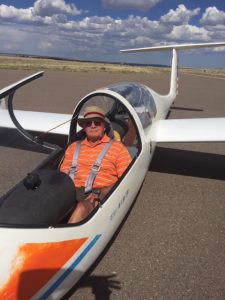