I had decided to go back to New Mexico to get my glider pilot add-on rating. It would just be a brief return. The Sundance Aviation owner In New Mexico, Rick Kohler, offered to do some refresher flights on one day and the check ride the next. Just in case there might be a weather issue, I included one extra day in my stay.

The flight out west was scheduled to depart Indy at 6:15 a.m. That meant I would have to wake up at 2:30, be out the door by 3:15 to drop off my car by 4:30 and catch the shuttle to the airport. I overslept and awoke at 3:15 a.m.! Oh, no. That’s no way to start a trip. Combing my hair and grabbing my bag and brief case which had fortunately been packed and laid out the night before, I was out the door five minutes later. Traffic at that hour was light and driving perhaps a few MPHs over the limit, I was at the airport in plenty of time for my flight. Whew.

Picking up my rental car in Albuquerque, Hertz told me I was being given a vehicle from their Mystery Fleet. Huh, like what? A Dodge Ram Hemi pick-up truck. Well, why not. The truck turned out to be tricked out with all the bells and whistles and plugging my Smart Phone’s map program into the truck’s USB outlet, I was on my way to Moriarty, about 40 miles east of the big city.

After checking into my motel, I drove to the airport to let the folks know I had arrived. Coincidentally, one of our Indiana Club members was there getting his commercial glider endorsement. Sundance is a popular operation with several of our LSC members. Incidentally, I refer to my local club as an Indiana club because we fly out of Seymore, Indiana. But it’s actually the Louisville Soaring Club, with most members from Kentucky.

The first day would be some refresher flights with one of the instructors, and then the check ride the following day with Rick, the FAA examiner. In addition to the flight test which I feel reasonably confident about, the endorsement also included a practical test on rules and regulations, glider operating specifics, and a whole host of FAA rules that are quite convoluted. As a power pilot, who spent most of his 50-year aviation career flying around the world on an instrument flight plan, the rules and regs were actually easier because you were in constant communication with air traffic controllers who gave you clearances through the spaghetti bowl of regulated airspace. As a glider pilot, navigating visually through a variety of controlled areas, you need to know where you can and cannot go, different classes of airports, distance from clouds at varying altitudes, and a whole pile of rules that fill a five-pound book titled Federal Aviation Requirements. I’ve been spending hours, pouring over these manuals and guides trying to anticipate the questions I might be asked. That’s what I did on the four-hour flight out to N,M. and that is what I did each night at the motel.

Moriarty is a sleepy little town of less than 2,000 people that straddles historic Route 66. The four-lane divided highway is sparsely surrounded by small businesses that haven’t seen a coat of paint or new signage since the 1960s. About 25% of the buildings are boarded up. The only real indication of activity are two big travel centers just off Interstate 40 that runs past Moriarty. There are four or five motels in town but how they stay open is a mystery to me. Their parking lots appear to be empty.

My motel this trip, a Super 8, is 100% better than the Motel 6 I had two weeks ago. The room is comfortable with desk, armchair, refrigerator, Microwave, and morning breakfast, none of which were offered at Motel 6. I appear to be only one of perhaps four guests, however.

There are a couple of Mexican restaurants in town and that first night I ate at Chili Hill, a place I had visited two-weeks before. I forgot they didn’t have a liquor license so my thirst for a Margareta was not to be satisfied. In addition to TexMex offerings, the menu included a number of down-home favorites and I ordered meatloaf and mash potatoes. The place was definitely not fast-food, so I spent the 40-minutes waiting for my meal observing my fellow diners seated at four scattered tables.

Of particular fascination was a couple directly across from me. The man was string bean skinny with arms like toothpicks. His wife – I assume it was his wife – was enormous. The nursery rhyme “Jack Sprat could eat no fat, his wife could eat no lean” came to mind. When I say enormous, I’m talking about the 500-600-pound category. She overflowed her side of the table and I first thought she was on two chairs but later saw it was just one. Although the restaurant was relatively cool, the lady continuously fanned her face with a menu.

I would have loved to have overheard their conversation because she appeared to be whispering sweet nothings across the table to Jack although he was paying no attention and did not acknowledge any comment with so much as a nod. Maybe her sweet smile was bitter sarcasm. I was hoping the couple would finish eating so I could watch her ambulate out of the restaurant but alas, I finished first.

So much for Moriarty entertainment.

I met Bill Hill, the instructor who was going to give me my warm-up flights at the airfield at 9:30. Bill’s a nice guy with a delightful sense of humor. We reviewed what I would be practicing, and climbed into the glider preparing “to cheat death” as Bill put it.

My take-off wasn’t as smooth as I wished, my tow to altitude wasn’t as perfect as I wanted, and the maneuvers – boxing-the-wake, stalls, steep turns, and landings – weren’t as precise as I hoped, but Bill kept saying, “Excellent, excellent, excellent,” so I guess I did okay. He told Rick, the flight examiner I’d be flying with the next day, “Stick a fork in him, because he’s done, he’s ready!” Well, we’ll see.

So, after four take-offs and landings, I was through for the day and it was only noon. What do I do the rest of the day? I was tired of studying.

Across from the glider port was an antique car museum. From the highway it looked like a junkyard, but I wanted to check it out.

It was absolutely amazing! It wasn’t only autos but had trucks, school buses, tractors, jeeps, forkfifts, farm equipment, and toys, toys, toys. Most of the playthings were auto related, and there were dump trucks full of discarded toy cars and trucks.

The warehouse was filled with Model Ts, touring cars, Ford T-birds from all years, delivery trucks, wreckers, dozens of Model As, vans and roadsters. Those 200 vehicles were housed inside, under roof, and most were polished with showroom attention. But outside around the building, rusting in the rain and bleaching in the sun were hundreds, maybe a thousand, old vehicles dating back to the early 1900s but also included mid-century Chrysler 300s and Bonneville station wagons as well. I saw a rusty match for my first 1940 Ford coupe, and a sagging 1948 Buick Super like my dad bought after World War II. 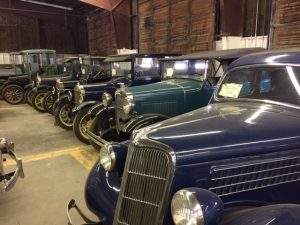 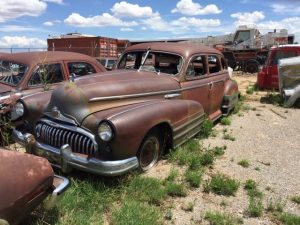 I met the museum’s owner/collector, an 83-year-old guy who looked 103. “You must have 100s of car restorers visiting here looking for hood ornaments or taillights for their restoration projects?” I asked.

“Really! Wow. This would be a place the stars of that TV show ‘Pickers’ would love to visit.”

“Yeah, they called. But I said don’t waste your time. I don’t sell nothin.”

Incredible. All that history. All those classic vehicles just rusting into the dirt.

As I left, the old man called out, “Come back again. I’ll probably have different stuff for you to see.”

I replied, “I’ve been here over an hour and probably didn’t see 10% of what you have now.

What an astonishing museum and equally eccentric collector.

Still early in the afternoon, I saw a sign for the Moriarty History Museum. I found it but it was closed on Mondays, as I discovered many of the other businesses and restaurants were as well. Monday? What’s that all about?

Okay, one more late-night session with my manuals, handbooks and those freakin’ Federal Aviation Regulations.