Pulling back the drapes in my Moriarty, N.M. motel room, I was alarmed to see a large buildup of storm clouds to the north. Man, I hoped that wouldn’t lead to the cancellation of my flight test that day. I called Flight Service to get a weather briefing and learned afternoon thunderstorms were indeed in the forecast for our area. I had allowed an extra day of my stay in New Mexico in case weather became a problem, but I so wanted the get this glider pilot certification over with.

My concern all along has not been the check flight so much, but with the two-hour oral practical exam that preceded it. Preparing for the practical test had been the focus of my studies the last several weeks. Rick, the examiner let me know that a few wrong answers were grounds for failure. Thanks, Rick, no pressure there.

The oral exam went okay. There were a couple questions I was uncertain about -i.e. the type of clouds found below the lenticular clouds when flying in mountain waves – but Rick allowed me to look up the answer in the pilot’s training manual. So, I passed. Now to the glider to go flying.

Walking out of the hangar, we were about blown over by the wind gusts. And the wind drection was exactly 90 degrees to the runway. Yikes. It was blowing 10 knots, gusting to 16. The glider I’d be flying has a cross wind tolerance of 11 knots.

Rick asked me, “You’re pilot in command on this flight, what do you want to do?”

I told him, “If I was flying solo for fun, I wait for a better day. But I’m so eager to get this certification over with, let’s give it a try.”

Winds of this nature were going to be a challenge keeping the glider behind the tow plane during the take-off roll. And then once off the ground, just holding the glider in proper tow position behind the power plane would be ten times more difficult because of the gusty conditions. As would the maneuvers I’d be expected to demonstrate. Three flights were planned.

The first take off went better than expected perhaps because we lucked out between gusts. However, holding position behind the tow plane took intense concentration. If the glider becomes too low, too high, or right or left of the tow plane, it starts yanking the tow plane around which can be extremely hazardous for both.

Maneuvers in the gusts were also much more difficult. During my first 360 degree steep turn, Rick said it was barley passing but he allowed me a second try which was much better. Other drills were performed within tolerances but took concentrated focus. I’ve always been rather good at crosswind-landings and that went fine.

Lightning suddenly began flashing from nearby clouds, so Rick said the second flight would be our last. “Demonstrate slips with right wing low and left wing low, then fly a perfect pattern landing,” he said. My slips were marginal, but my crosswind landing squeaked the wheels on the runway and the glider rolled to a perfect stop.

We climbed out of the glider and Rick said, “Congratulations, you passed.”

I had allowed a fourth day in New Mexico to cover unexpected weather issues or other delays in my glider pilot endorsement. However, now that it was behind me, I wanted to forget about gliders for a few days. I thought maybe I’d return to the town of Madrid, a ghost town taken over by artisans, just 40-minutes from Moriarty. Although I was there two weeks ago, there were art shops to explore and restaurants to visit. Rick had mentioned another ghost town just a few miles north of Madrid, so I thought I would check that out first.

The town of Cerrillos was pathetically rundown. Its dirt streets were overgrown with weeds and its few houses and weathered buildings looked ready to collapse. Then a read a sign that said, “Los Cerrillos was seriously considered for the capital of New Mexico in the 1880s due to the nearby deposits of turquoise, gold, lead, silver, copper, zinc, and coal, and because of its prime location on the new railroad. Soon the population grew to 2,500 miners and merchants. Twenty-one saloons, four hotels, numerous brothels, two stables, two churches, several general stores and a Western Union office thrived.” Wow, I had to learn more about this place.

Cerrillos had an eclectic museum of sorts and although it included mining artifacts from the early 1800s it also included coffee cans and coke bottles from more recent years. I did learn about its mining history, however. When considered in collective terms of longevity, history, cultural and gemological significance, Cerrillos stood head and shoulders above every other mining district in the American west.

Although Cerrillos produced Gold, silver, lead, and zinc, it was known primarily for its sky-blue turquoise. It is the oldest continually mined site on the continent, with mining going back more than a thousand years. Cerrillos has produced more turquoise than any other site in the southwest.

The value of turquoise was fickle. Its desirability ranged from worthless to precious depending on its popularity at different times over the years. The ancient Puebloans began collecting turquoise in Cerrillos after 900 A.D. Apaches tied turquoise beads to their bows thinking it made their arrows fly straighter. Navajos used turquoise as a form of currency. Many tribes believed the stone brought good fortune, and a long, healthy life. 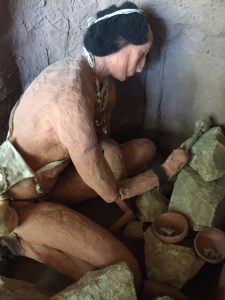 After the Indians, Cerrillos was mined by the Spanish in the 1600s and later by the Mexicans in the early 1800s. When the Americans took over from the Mexicans, they thought Turquoise was unworthy of their attention. However, an enterprising entrepreneur by the name of D. C. Hyde with connections to Tiffany & Company started promoting Cerrillos turquoise as the equivalent of “the best Persian gems” and in 1895 the popularity of Turquoise jewelry soared.

Styles change over the years. Turquoise gem values fluctuated greatly dropping to a low value in 1912, and 1920, then rising again in WW I and WW II, then back low again in the 1950s. There was a last chance for continued Cerrillos mining in 1970 when a mining company considered using acid leaching to mine previously untouched turquoise resources but never followed through on the proposal. Cerrillos became the sad ghost town you see today.

I concluded my day by a return to Madrid and a delicious hamburger at the Mine Shaft Restaurant. Oh yeah, and a visit to gift shop for a Cerrillos turquoise bangle for my sweetie.

Tomorrow morning it’s back home again in Indiana. (Sing along if you wish.)