After my years as a Navy pilot and a brief stint in the insurance industry, I next found myself in Indiana in a family business started by my father-in-law. I hadn’t flown an airplane in several years but a golfing buddy, a pilot, took me aloft and turned over the controls. Gad, I loved it. I didn’t realize how much I missed flying.

Aroused by those old skills, I discovered I still qualified for the GI Bill and it included flight instruction. I already had my single engine/multi-engine/instrument/commercial pilot ratings but I was now entitled to instruction as a CFI (Certified Flight Instructor). I really had no intension to be a flying instructor, but the lessons and flight time would be paid by the GI Bill, so why not?

It was fun being back in the air again and part of the course suggested trying out my lessons on a student pilot. Hmmm, how about my eight-year-old son Eric? Eric was a willing Guinea pig. Not only was he a serious flight student, but he dove into aircraft handbooks and flight manuals with great enthusiasm. Our weekends together practicing stalls, chandelles, and landings were great fun for me and a serious and successful challenge for my third-grade apprentice.

Some months later, a move to a different part of the state and opening a new branch office interrupted my CFI instruction but by that time I was hooked on aviation and flying regularly as a member of a flying club in my new community.

One of my flying fantasies was barnstorming across the United States in an open-cockpit, bi-wing airplane, sleeping under the wing in a farmer’s field. I didn’t have a bi-wing airplane but did have access to a Cessna Skylane and an opportunity to head west for a business meeting in San Antonio, Texas. Eric had just completed his sophomore year in college and was available to join me. Why not take the back seat out of the Skylane, fill it with bicycles and camping gear and use that business trip as the start of a western cross-county adventure?

What a wonderful venture it was. Our travels included stops in Hot Springs—Ark , San Antonio—Tex, El Paso, Grand Canyon National Park, Palm Springs—Cal, Santa Catalina Island, Death Valley, Salt Lake City, Ogallala—Neb, Elgin—Ill, and back home. What wonderful memories we have of flying across the western plains, camping in breathtaking venues, biking through scenic wonders, and enjoying a special bonding of father and son.

The years passed. Eric got his Masters and Doctorate in music at Indiana University and I continued to fly as part of my expanding business responsibilities. After Eric became a professor of Music at Butler University and conductor of the Indianapolis Symphonic Choir, he enrolled in a flight school at Eagle Creek Airport in Indianapolis to get his pilot’s license. On his first flight, the instructor asked if he had ever flown before. “Yes,” Eric said, “my dad used to take me up.”

“So, do you want to try making the take off?”

“Sure,” Eric said. He applied power, held the plane straight down the middle of the runway, lifted off, trimmed for climb, leveled off at 3,000 feet, and set the cruise power setting.”

The astonished instructor asked, “When did you fly with your dad?”

“When I was eight-years-old.”

Eric is now an accomplished private pilot who volunteers to fly medical patients as part of the Angel Air Organization.

More years passed. I retired in 2000 and hadn’t flown an airplane in 19-years, but recently became interested in flying sailplanes. In order to get an “add-on” glider pilot’s rating, I would have to get a biennial flight review (check ride) in a powered aircraft. I called Eric and asked if he could fly a Cessna down to Bloomington, Indiana, so I could practice my old flying skills.

Eric talked me through those partially remembered pre-flight procedures, coached me in all the engine-run-up steps, verbalized the take-off and maneuvering airspeeds, and demonstrated proper landing techniques. He is not only a skillful pilot but an extremely conscientious and safe pilot as well. Following his tutelage, I duplicated the procedures and could feel the old rust falling away. 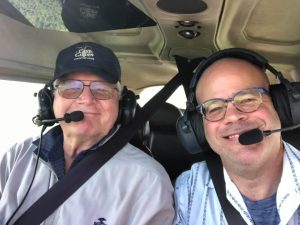 When we walked into the airport’s office after the flight, I told the woman behind the counter, “I taught this son to fly when he was eight-years-old and today he taught me.”