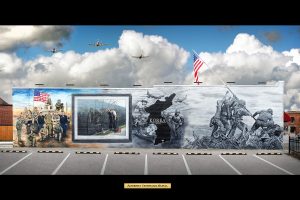 The small town of Amherst, Ohio, on the shores of Lake Erie just west of Cleveland, has an exceptional veteran’s mural painted on the wall on one of its downtown buildings. The mural has four sections depicting the WWII flag raising on Iwo Jima, a Korean War mosaic, a Vietnam Wall illustration titled “Reflections,” and a Gulf War montage showing soldiers and weapons from the Iraq and Afghanistan wars.

Many of the soldiers’ faces in the paintings are imagines of actual GIs from the local area killed in those wars. The Vietnam panel, however, has a face that the artist, Mike Sekletar, imagined just to fill a spot in the painting. Sometime after the mural was finished, Mike got a call from a parent who wanted to know where Mike got the image of their son who had also been killed in Vietnam. Wow.

Lou Maglio, newscaster from Fox 8 News, MC’d the ceremony. Among the several hundred attendees were 350 students from a local high school who had been bussed in for the event.

After an Invocation and the National Anthem, I was introduced as the guest speaker. 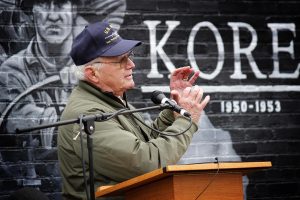 I kept my talk brief because of other program features and in consideration of the 40-degree temperatures. I led off with a humorous story about a pilot making his first aircraft carrier landing without his seat harness fastened which appeared to be enjoyed by the audience. I then spoke of the pride I felt wearing the uniform and serving my country. Finally, I saluted my brothers and sisters in all services, including our communities’ first responders who watch our back 24/7. That comment brought the audience to its feet in a standing ovation.

Following my talk, tribute was paid to two men whose images are prominent in the mural’s painting. Both had passed away in the previous year. Next, the Amherst Veterans Military Honor Guard fired a 21-gun salute followed by the beautiful singing of God Bless America by Barb Smith, secretary of the Amherst Veterans Mural Association Committee.

I found the entire Amherst Veteran’s Tribute to be a moving and inspiring experience. Hats off to John Sekletar (Chair) and Mike Bokulich (Co-Chair) for such a meaningful and well-planned Veteran’s Day celebration.

“Thanks for your service,” you say. I reply, “I was proud to serve.”