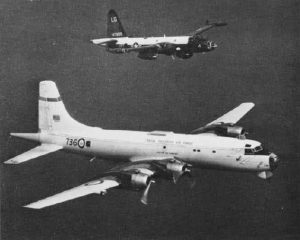 Our goodwill mission to the Canadian Air Force aerodrome in Nova Scotia, included a demonstration flight in the Canadian Air Force’s Argus aircraft. Aboard that big lumbering airplane were all eleven of our Navy crew plus their fourteen crew members. After taking off and heading inland over the high terrain of Nova Scotia, Plane Commander Jerome McFadden invited our Navy co-pilot, Bill Corrigan, to take the co-pilot’s right-hand seat. I stood behind the pilot on the left side of the cockpit. The Argus had an unusual configuration in that the power levers were controlled by the flight engineer, Warrant Officer Spencer Pearson, located behind the pilot and copilot off to the right side, out of sight of the front windscreen. Spencer made the power adjustments at the command of the plane commander.

We were flying at an indicated 6,000 feet when McFadden instructed Pearson to shut down and feather number four engine. I was surprised. I was not surprised that the Argus could fly on only three engines, but since we were only what I estimated to be 4,500 feet above the 1,500-foot terrain, I was surprised engine-out practice would be permitted at such a low altitude. Nevertheless, with three engines running we lost nary a foot of altitude nor a knot of airspeed.

Then McFadden called back to Pearson to feather number three engine. Now I was impressed. With only two engines operating on one side of the aircraft, the pilot did a series of shallow turns to demonstrate the plane’s maneuverability and control. Corrigan looked back at me from his copilot seat in obvious admiration of this demonstration. However, I couldn’t help but notice we had now lost 15 knots of airspeed.

When commander McFadden called for the feathering of the number two engine, I was aghast. No way was this big bird going to be able to stay in the sky with only one engine. Almost immediately we lost another 10 knots of airspeed and precious altitude as McFadden traded altitude for the slowing Argus. To my relief, his call for full power on number one and unfeathering and bringing back number four engine was an obvious and urgently needed correction.

Warrant Officer Pearson out of sight of the terrain rising below us, calmly replied, “In a bit, sir. Number four is just coming up to temperature.”

We were in trouble. We were no more than 500 feet above the rock and tree covered earth below and no more than 5 knots above stall speed. Worse than that, we were in an aerodynamic condition known as the “back-side of the power curve.” Performance graphs show that although normally more power produces more speed and greater lift, once an aircraft slows below a certain lift factor, the power curve reverses and additional power causes the aircraft to pitch up with a greater propensity to stall. The only solution to our situation would be to reduce power and lower the nose of the plane. With tree limbs reaching toward our airplane’s wings, that was not possible. We were going to crash.

In my mind I could picture the fiery meeting of metal, fuel, and mother earth. I also saw in my imagination the tail of the Argus breaking loose. And in that tail section, I decided, was where I needed to be. As I turned to run aft, my last glimpse forward was of Corrigan groping for his previously unfastened seat belt and an unbelievable close up of treetops through the front windscreen.

The crew in the rear of the plane sensing the plane’s unusual nose high attitude was frozen with fear. I shouted, “Going down, going down!” and dove for the deck wrapping my arms around my head. I held my breath waiting for the eminent ear splinting crash. And waited. And waited.

Suddenly the aircraft plunged downward floating me weightless off the deck. At the same time, I heard the roar of four engines at full power. I couldn’t believe it.

Back at the aerodrome, I asked Bill Corrigan what the hell happened. He said, “Man, I thought it was over. We were seconds away from disaster. But then we crested a ridge top with a deep valley behind it. As McFadden pushed to nose over, he called for full power NOW! And Pearson got the message.

Our Navy crew left Halifax that afternoon. No report of the event was ever made by our officers. However, from the somber nature of our departure, it was obvious the incident was a great embarrassment to the Canadians. We didn’t know what happened to Captain McFadden because he disappeared immediately after we landed. However, we suspect the plane commander found himself in deep trouble

It was 1964. In the twelve years the Canadian Air Force had been flying the Argus they had never lost one aircraft in an accident. How close then came that day to not only losing a plane but taking a full Canadian and U.S. Navy crew with it.