Stories in the book, “Across American on Foot” about the endurance and perseverance of the trans-continental (“transcon)” runners are truly astonishing. My son Brian, having run across the U.S. in 1998 is one of the book’s authors and its editor. The idea for the book originated with Jim McCord who ran across America in 2002. Jim had been in contact with many transconers through a website and came up with the idea of collecting their unique stories in a book.

Having run some nine marathons myself, I have appreciation for these incredible achievements. I ran over 2,600 miles a year for several consecutive years. One of my other sons, Chris, and I ran 164 miles across Florida in four days. Yet, those feats were walks in the park compared to the folks in Brian’s book.

No transconer is more amazing than Helene Neville, a 50-year-old cancer sufferer who ran the perimeter of the United States with a chemo stent in her chest. She first ran north up the east coast from Florida to Maine. Then west from Maine to Washington. Next south to southern California. And finally, back east to Florida. She did it by running over 30-miles a day. Unbelievable! Some of her treks were interrupted by Cancer flair-ups that required hospitalization, but against doctor’s orders, within days she was back on the roads again.

Others in the book accomplished these ultra-mileage achievements while dealing with other health issues. Doug Masiuk was a type 1 diabetic. Just imagine running 30 or 40-miles a day having to take periodic insulin injections and do blood sugar tests? Terry Fox lost his leg to cancer but then went on to run across Canada. Another runner was 73-years-old Newton Baker. Of the 400 people who have crossed the U.S. on foot since first recorded in 1908, he is the second oldest. Baker was running with a group of athletes who ran 26.2-miles daily for 100 days, crossing from California to Washington D.C. Baker was frequently offered rides and support by citizens unable to imagine this senior in running shorts jogging across the plains and summiting mountains.

Bill Rogers, the world class marathoner from the 70’s and 80’s has written a glowing endorsement of the book. I told my son Brian that Rogers probably remembered me running with him when he won the Boston and the New York City marathons. Rogers was no more than 1,000 yards ahead of me—until the starting gun was fired, that is. Okay, so Rogers crossed those finish lines an hour and 20 minutes before I did.

Frank Giannino ran across the U.S. twice. Frank set a crossing record by running 3,070 in 42 days. That’s 73 miles a day! He mentioned that Walt Stack saw him off at the start in San Francisco on one of his crossings. I’m familiar with Walt Stack. His face appeared on the cover of Runner’s World magazine. Stack was a 70-year-old laborer who used to run six-miles to work every morning and then swim 2-miles in San Francisco’s chilly bay before starting work. Stack participated in a number of marathons. His secret, he claimed, was drinking beer during the race. I ran the Boston Marathon in 1979. At one point in the race I saw the spectators going crazy up ahead of me. They were cheering for Walt Stack. As I passed, I saw Stack had a can of beer in his hand. Go Walt!

Chris Finill and Steve Pope were two Englishmen who ran across the USA together in 2011 from California to New York. They mentioned the motivator for their Transcom was a book by James Shapiro titled “Meditations from the Breakdown Lane.” Shapiro was a cross-America runner. Other runners in Brian’s book also mentioned Shapiro’s influence in their own American run as well. I had to smile reading that because it was Shapiro’s book that gave me the idea of a long distance run with my 17-year old son, Chris. As mentioned, our run in 1985 was only 164-miles across Florida, but it was 40 miles a day for four days, nevertheless.

Another interesting thing about the Brits run was that they wanted to finish in New York in time to run the New York City Marathon. They arrived just 24-hours before the race. Nothing like topping off a 3,000-mile jaunt by racing an additional 26.2 miles. They finished the marathon in three hours and 38 minutes which coincidently was the same time I had running New York in 1982.

Of the 27 athletes writing chapters in Brian’s book, the one I tip my hat to MOST for her pure determination and perseverance is Jan Walker. Jan, a 50-year-old, slightly overweight woman, was not a runner although she pretended to be. Jan didn’t run or even jog, she shuffled. Elite athletes, the Kenyans and Americans like Bill Rogers run marathons at a five-minute per mile pace. Many well-trained, runners in the marathon masses run at seven-minute per mile paces, a brisk run by a 10K amateur might clock an eight-minute per mile pace. Jan shuffles along at a twenty-minute per mile pace. Nevertheless, her determination when training for her across America effort was preceded by entering ultra-marathon races. Many Ultras (anything longer than 26 miles) have cut-off times if not reaching certain mile markers by a certain time. The Tennessee 314-mile ultra, required finishing in ten days. Jan made it in nine and a half days. In 2014 Jan entered the Florida Ironman Triathlon—a 2.4-mile swim, a 112-mile bike ride, and a 26.2 mile run. And she finished. Just amazing!

Jan’s 3,154-mile transcon was interrupted by a 25-day injury recovery, but Jan got back on the roads and made it to the finish line. That take guts, determination, and perseverance. What an amazing athlete Jan Walker is.

My favorite chapter in the book is chapter six, written by my son. Brian’s run was unique. Most transcontinental runners ran on paved roads. Brian ran on trails. The American Discovery Trail is a network of hiking trails across the United States. There were sections of paved roads, of course, but most were winding foot paths that were anything but straight lines from one point to another. Instead of the typical 2,500- or 3,000-miles across the continent, Brian’s run was nearly twice that distance.

Most transcon runners had a support vehicle following them or at the very least pushed a stroller carrying camping supplies, food and water. Brian had a 12-pound fanny pack with just the barest of necessities. Every day he was faced with the challenge to find something to eat and a place to sleep. Which, incidentally, led to some very interesting and often humorous situations.

Occasionally, family or friends would rendezvous with Brian to offer support for a few days. His oldest brother and I flew an airplane out to spend a couple days following Brian on bicycles as he ran the Katy Trail in Missouri. The Katy is part of the America Discovery Trail network and is an old railroad bed that follows the Missouri River. I offered to carry Brian’s fanny pack, but he said, “No, Dad. I’m just used to it swinging back and forth on my hips.” As we followed Brian, I marveled that the speedometer on my bike never wavered from six-miles-per-hour—all day long. I treated the three of us to a motel and an all-you-can-eat buffet one evening. Have you ever seen anyone pile his plate several inches high with food … four times … and then make repeated trips to the dessert section? Had to have been a 15,000-calorie dinner.

Brian’s summary of his incredible eight-month adventure is told in more detail in his book, “Getting to the Point, in a Dozen Pair of shoes.” The Point was his finish line at Point Reyes California. 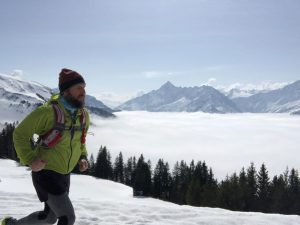 Brian, running in Switzerland where he now

teaches at an international school

The common thread in all 27 chapters of “Across America on Foot” is yes, the crossers experienced exhaustion, injury, and temptations to quit, but all mentioned the magic of “road angels,” strangers who appeared when needed most to offer kindness, generosity, food, water, or shelter. Not one of the authors regretted their life-changing experience.

It’s a great read whatever your athletic interest happens to be.

6 thoughts on “Across American on Foot”