My three sons were great companions during their growing up years. One of our annual activities together was attending the week-long airshow in Oshkosh, Wisconsin. We first started going nearly 45 years ago when Eric and Chris were just 9 and 7 years old. Brian, my youngest, just 4, didn’t join us until a couple years later.

On some years we flew up in my airplane and camped under the wing and other years we took our pop-up camper and stayed in the campground. It was one of the early camper years that one of those silly, humorous events occurred that will be forever remembered.

We had just arrived in Oshkosh, had set up the camper, and drove to a parking spot just off the end of the airport’s runway to watch the daily airshow. The three of us climbed onto the hood of our car to watch the airplanes roar over our heads.

While watching, I had one of those gaseous urges in the alimentary canal that required release. The polite terminology is flatulence I understand, but forgive me if you object to crudeness … I needed to fart.

It must have been the resonant quality of the car’s hood but what might otherwise have been a normal discrete toot, was amplified into a bombastic explosion. Eric and Chris thought it was the funniest thing they ever heard and were rolling off the car laughing.

That was 45-years ago. The other day I saw a cartoon of a father and son watching airplanes fly overhead from the hood of a car. 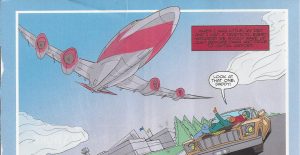 I scanned the image and emailed it to Eric and Chris with no explanation other than, “Does the attached remind you of anything?”

Chris and Eric replied immediately. Chris’ said, “Ha! Does it ever!!! Except the car was white and the dad was vibrating his sons off the hood with his fart.” Eric wrote, “I just remember how incredibly LOUD it was … for a moment we couldn’t even hear the B-17 flying over our heads.”

I’m laughing now as I write this. That silly memory is indelibly imprinted on my brain, right up there with white-water rafting trips, college graduations, weddings, and all those other more noble and honorable milestones.