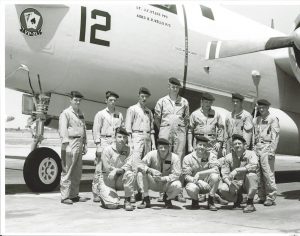 The following is a letter I sent my mother 55 years ago:

Greetings from sunny Spain. I feel foolish dreading this deployment because I’m really enjoying myself here.

We left Naval Air Station Brunswick, Maine, early on the morning of 18 August along with four other aircraft for a four-hour flight to Argentia, Newfoundland, for our first fuel stop. Our aircraft could actually make it to Spain non-stop, but if we had an engine failure half-way there, the higher power settings on the remaining engines would be cutting it too close to reach a safe landfall. We would also make another landing for fuel at Lajes in the Azores.

Argentia is nothing but a pile of rocks with no trees or vegetation anywhere. I couldn’t imagine being stationed there, but several of my former pre-flight classmates are. We were happy to leave the cold wind and bleak surroundings and head for the Azores; our last mid-ocean stop.

We would spend the night in Lajes. The landing in the Azores was interesting. The tower was reporting 60-mph wind-gusts. Fortunately, the wind direction was right down the runway. On our ground-controlled approach (GCA) it felt like we were hardly moving. Our plane normally needs to reverse engines and 3,000 feet of runway to get stopped after touchdown, but that night we could have landed and stopped in someone’s driveway. (Not really 😉)

My watch read 11 pm, but it was 3 am local time. Lajes is like a mid-ocean oasis for transiting aircraft and for that reason the officer’s club bar and restaurant are open 24-hours a day. We couldn’t decide whether to have a drink after our long flight or a hot breakfast, so we did both.

The next morning prior to takeoff we made a visit to the base exchange. Because of the bases’ location, prices are free of taxes and very reasonable. Omega watches and electronic equipment are half what you would pay in the states. I bought an AM/FM portable radio with which I am very pleased.

The flight to Rota, Spain took six hours and on arrival, VP-56, the homesick squadron we were relieving was on the runway opening cans of cold beer as we stepped out of the plane. I imagine at the end of our six months we too will be looking forward to our reliefs. Right now, things are just too new and interesting to think about going home.

Niles was supposed to be our interpreter. On the flight over, He impressed us with his claims of background in the Spanish language. However, in face to face encounters, Niles fell apart badly. Unless your aunt wanted a red pencil box, he was useless. However, we found the locals to be very friendly and sign language proved to fill in many communication gaps.

Thanks to the Navy’s influence, Rota may be the most commercial and gaudy town in Spain. And yet, overlooking its Las Vegas Bar and El Norfolk Night Club, it has a certain charm. It has a bull ring in the center of town and numerous sidewalk cafes.

The weather has been quite warm, 95 or so. Reminds me of Jacksonville or Pensacola in climate. Like those same latitudes, it should be cooling off with the coming of fall.

The flying is very interesting. We work with the 6th Fleet and due to a surprising increase in Soviet Block shipping and submarine traffic we are kept busy flying our patrols. Our schedule revolves around a six-day cycle. The six aircraft here at Rota fly one 12 or 14 hour patrol each week, next day is a maintenance day, then the following day a training flight, then we stand the Ready Duty, next is a local flight, then the Stand-by Ready Duty, and then a day off. Because of the Soviet activity in the Mediterranean, the Ready Duty crew and the Stand-by crew are often launched to track the submarines. Flying four days a week leads to a flying proficiency beyond any I had previously experienced. I’m certain I could reach out blind-folder and fly that big bird.

My wife and several of the other officer’s wives are going to be joining us here next week. The guys are required to maintain a BOQ room, but we need to find an apartment off base for the wives. There are several decent choices available and quite reasonable at $120 to $170 per month.

That’s about it for now,