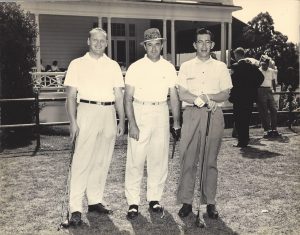 After the tournament, my dad, a GE executive and two other GE guys, were given an opportunity to play golf with Sam, a golfer acknowledged to be the world’s greatest player.

Snead met them on the driving range prior to their round. Shaking hands all around, Sam asked, “So what do you boys want to do? Do you want me to give you some golf tips, helpful suggestions on your game? Or do you just want to play and tell funny stories?”

The GE guys were so in awe of this larger than life superstar, they mumbled their replies, “Err …well … err … gee.”

Sam, chuckling at their nervousness, said—addressing my father, “Why don’t we see what we have here. Jim, why don’t you hit a 7-iron out toward that 100-yard marker?”

Now you must understand my dad’s golfing ability. He never had a lesson in his life, but being a strong guy, he used to muscle the ball off the tee. He had a big round-house swing that could send a ball a country mile, but with a banana shaped flight trajectory that curved 20-yards right. But dad knew his swing and by aiming to the left, could usually hit a fairway. The most memorable part of his swing, however, was its unbalanced nature, which required him to hop around after his follow through in order to maintain his balance.

Dad took his 7-iron, aimed slightly left and with a huge rip tearing a six inch divot out of the ground, sent the ball flying as he finished with his signature two hop recovery. The ball arced to the left, climbed to 40-feet, then sliced back to center. And BANG, slammed into the center of the 100-yard marker.

Dad complied, and in a repeat of the first shot, sent another six-inch chunk of grass flying in the air. As his hopped around recovering, all watched mesmerized as the ball arced through of the sky and once again BANGED off the center of the 150-yard marker.

Sam was speechless. Finally, after a long pause, he said, “You know fellows, why don’t we just tell funny stories.”

I repeated this story at Mom and Dad’s fiftieth wedding anniversary party, and Bob Roton, one of the other GE guys to play that day, said, “You got it right, Jimmy. That’s exactly the way it happened.”

4 thoughts on “Sam Snead Gets a Golf Lesson”