In 2002, Michele and I had just completed a seven-day travel tour with an Indiana University Travel group to Tuscany, Italy. It was a wonderful few days and afterwards rather than return home, we continued our European travels to Lake Como, Switzerland, Paris, and then lastly spent some days with Michele’s brother and sister in Bar Le Duc, France.

Lake Como was described in our travel brochure thusly: “Just an hour from noisy, bustling Milan, Lake Como is a jewel like oasis of tranquility, a magical combination of lush Mediterranean foliage and snowy alpine peaks. Charming towns ring its shores with elegant 16th to 19th century villas. Ferries carry passengers across its shimmering waters from town to town. Many claim it is the most beautiful place in Italy.”

Michele and I spent two days visiting the charming lake front towns of Varenna, Bellagio, and Laterria. Planning activities for the third day, I saw a brochure advertising a two-hour mountain bike ride from 3,000 feet above the town of Bellagio. I’d never been mountain biking before, but it sounded like fun.

A phone call to the outfitter was not very informative because of language difficulties , other than I understood to take a ferry to the Bellagio docks and meet the outfitter at 9 a.m. the next morning. I found him there as agreed with a small truck and several mountain bikes tied behind.

“Only one?” he questioned in broken English. “Yes, just me,” I replied. And off we went on a 30-minute drive to the top of the mountain. I should have suspected I might be getting in over my head as our vehicle crawled up that elevation negotiating one hairpin curve after another. It was apparent if the bike trail came straight down the mountain, I was in for one doozy of a ride. But what the heck, the bike has brakes, right?

“Whoa! Wait. Where do I start? Where’s the trail?”

Pointing to a narrow path off the side of the road, the outfitter then went into long descriptions of hazards and instructions, all in Italian. They only part I understood because he repeated it slowly several times was, “Two buildings, one white. No go left. Very dangerous. Go right. Go right!” Oh, and he gave me a map, a photo of which follows. Yeah, right, that made it all very clear. 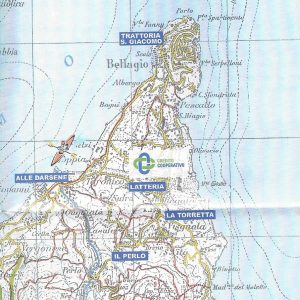 “Hmmm, okay. See ya.” Stark, this may be the stupidest thing you have ever done. No cell phone. No experience. And no idea what lay ahead.

The first 100 yards was a manageable downhill path, but then a rock strewn, near straight down slope appeared. Standing on the peddles to keep my butt off the bike’s slamming seat, with back wheel locked and dragging, I tried to weave my way between the larger rocks and maintain control. My arms were supporting my entire body weight on the handle grips. A broken leg here was going to be very unfortunate. How many days would it be before someone found me?

There were several lessor slopes and at least half-dozen fence gates to open in order to continue. One gate was locked which I had to climb over and that made me wonder how could this possibly be the route I was supposed to be following.

Several slopes caused the bike to become cattywampus and I got gobsmacked crashing into the rocks cutting my knees and calves. I laughed to myself remembering how I had tried to talk Michele into coming with me on this ride.

The day was cool, yet my shirt was soaked with perspiration from my efforts. Every once in a while, the trees would part and I could glimpse the lake and town appearing thousands of feet below me.

I came to that white building the outfitter had mentioned. On the path in front, someone had painted MTB and an arrow pointing left. “No. no,” I remembered him saying. “Left very dangerous, go right, go right.” I went right.

After an hour and forty-five minutes, I eventually came to a road I recognized as being the one we had driven up the mountain. It was paved. Enough of this mountain biking terrain stuff, I rode the blacktop in an exhilarating downhill coast, much too fast probably, into the town of Bellagio.

There I met the outfitter who with a casual glance at my bloody legs, said nary a word, took the helmet, strapped on the bike, and departed.

I could hardly wait to tell Michele about the fun she missed and decided not to wipe off the blood just to make the story all the better. It really was a very foolish adventure.