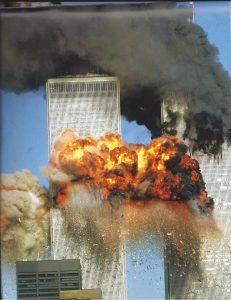 Almost all Americans born before the mid-1980s remember the morning of September 11, 2001. I’ll never forget it. The televised imagines of the burning World Trade Center Tower. The speculation of an accident. And then the second tower in flames. Not an accident but a terrorist threat. I remember the videos of the collapse, shown over and over again. And for weeks afterwards the constant TV coverage. The presidential news conferences. Pictures on a wall serching for the missing.

But years pass. Vengence and retaliation were delivered. Flags once flown daily from auto side windows dissapeared. The a “Never Forget” will forever recall the 9/11 disaster for millions, but time softens the images.

My visit to the 9/11 memorial in 2016 brought it all roaring back. Not only the shock I felt fifteen years earlier, but new awareness of stories of survival, unknown sidebars, and added details of that fatefull day, made it a gut-wreching, emotional experience. I wrote an article about my visit. You can read parts of it on my blog www.jimstarknavy.com/jimstark/blog. It’s lenghthy for a blog post so set aside 8 minutes for the reading.

It all began at 8:46 a.m. on September 11th, 2001. TV newscasts lit up with reports of an accidental crash of a civilian aircraft into the World Trade Center’s North Tower. Had to be accidental, everyone assumed. Some private pilot just screwed up. It couldn’t be a commercial airliner; those planes are under direct Air Traffic Control.

Ben Silverman had just arrived at his desk on the 79th floor in the North Tower. He was adding sweetener to his morning coffee when the wall to his right exploded. It disappeared in a burst of blinding flame, concrete rubble, and steel fragments.  Blasted by the searing heat, Ben watched the skin on the back of his hands blacken, then curl up like overcooked bacon.  “I’m going to die,” he thought. Then he heard a voice, “Over here! Over here!”

Ben crawled toward the voice. It sounded as if it came from the beyond. “Over here! Over here!” Ben couldn’t stand upright. His legs wouldn’t work, but he could crawl. His raw hands pushed through broken glass, steel fragments, and burning paper. The otherworldly voice pulled him along, even as he watched a steel desk, surrounded by yellow flame, melt into the floor.

Ben survived. He was lucky, not like the 2,996 individuals who lost their lives that day. Seventy percent of those who died in the World Trade Center Towers were not recovered. Not a piece of flesh, hank of hair, fingernail, or article of clothing was ever found.

Fred Yager, vice-president of Merrill Lynch broadcast services, hurried across the WTC plaza on his way to his office in the South Tower when he heard the explosion. He looked up and saw a gaping hole in the side of the North Tower at the 80th floor. Black, billowing smoke and flame poured from the gash. Debris fell around him, some of it large and heavy. Fred sought cover under an overhang where several others had gathered. Beside him a woman screamed in alarm. Fred followed her line of sight and saw a man in a suit standing in a high-up smoking window adjusting his necktie. The man then simply leaned forward and fell. His body somersaulted once before hitting the ground not far from where Yager stood. Fred said, the image of the man adjusting his tie, weighing his options, deciding to face the fatal impact rather than death by burning is as clear today for him as it was on September 11th.

Joe Ditmore sat in a meeting at 8 a.m. on the 105th of the South Tower. Ditmore planned to play golf that day until his boss called the meeting. Those around the conference table saw the explosion in the North Tower. Stunned, they heard the building’s loudspeaker instruct them to evacuate the building. Descending the stairway, the concussion knocked them off their feet when the second plane hit their building. They stood and continued down only now with more dispatch. They passed eight firemen climbing the stairs on the 65th floor. The look in the firefighter’s eyes told a fearful story. Those firemen seemed to know they were not coming back. Joe and twelve of his fellow workers made it to safety.

There were 2,000 people above the point of impact in the North and South Towers when the planes hit. Only eighteen survived. Keating Crown was one of them. He was in his office on the 100th floor in the South Tower when the North Tower was hit.  With the announcement to evacuate the building, he and hundreds of other workers went to the stairwells and started down. When they reached the 78th floor an announcement broadcast that the building was secure and to return to their offices. Most of the workers did. Keating and a few others stayed put. At that moment, the second plane hit. Seconds before where hundreds had stood, now only 14 remained alive. Crown was fortunate to be in a protected corner. Although his leg was broken and he had numerous lacerations, he was able to descend 78 flights of stairs.

George Tabeek, Port Authority’s second in command, manned his station at the base of the towers. He watched large pieces of debris landing about him, some the size of refrigerators. He witnessed a man exiting the South Tower decapitated right before his eyes. Tabeek decided those in the South Tower would be safer remaining inside and made the fateful announcement they return to their offices. He never imagined there would be a second airplane.

Tabeek felt responsible for the South Tower deaths and was racked with guilt. He had a nervous breakdown one year after 9/11. Ten years passed before he first attended the annual survivor’s reunion. Tabeek was overwhelmed by the support and understanding he received from those at the gathering.

At 9:37 on 9/11, a third airliner crashed into the Pentagon in Washington D.C. accounting for 125 deaths. At 10:03 a fourth hijacked airliner, heading for the White House, was forced to crash into the ground by a group of passengers led by Todd Beamer, who heroically initiated the charge with his memorable last words, “Let’s roll.” The number killed on the four planes, including the hijackers totaled 265.

St. Paul’s Chapel, built in 1766, is less than two blocks from the South Tower. It was already famous for having been one of the few structures to survive during the great New York City fire in 1776 that burned most of Manhattan Island. George Washington attended services there. On the morning of September 11, 2001, a Sycamore tree growing 45 feet away from the church became uprooted with the collapse of the towers. It landed on top of the church, its branches draped over the roof and down its sides like a protective embrace. Not one window broke in the church.

Gray ash, ankle deep in the streets, covered everything at ground zero. And yet, because St. Paul’s windows held, the church’s interior became an ash-free refuge and sanctuary for exhausted fireman and rescue workers. Thousands of emergency meals were served in the church during the rescue work. The Sycamore did not survive its uprooting, but four years later, sculptor Steve Tobin made a bronze casting of its root structure. The Trinity Root is a memorial to the tree that helped shield St. Paul’s Chapel from the debris of 9/11.

Despite the horrific death and destruction of the 9/11 terrorist attack, one must marvel at the unselfish generosity and compassion of New York City residents, known for their apparent indifferent coolness, who demonstrated unparalleled kindness that day. With all subways, trains, and bridges closed to egress, Manhattanites took in strangers for overnight stays and meals. The Coast Guard put out an appeal for boat owners, both private and commercial, to come to the Hudson River docks and ferry refugees to the New Jersey shore. Fishing boats, ferries, and pleasure craft by the hundreds lined up and evacuated 500,000 people out of New York

“On September 11, the world fractured. It’s beyond my skill as a writer to capture that day and the days that would follow–the planes, like specters, vanishing into steel and glass; the slow-motion cascade of the towers crumbling into themselves; the ash-covered figures wandering the streets; the anguish and the fear.  … My powers of empathy, my ability to reach into another’s heart, cannot penetrate the blank stares of those who would murder innocents with abstract, serene satisfaction.”
― Barack Obama 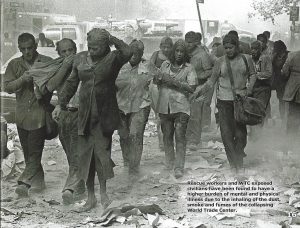 A day to remember. Never forget!