Shortly after I got my driver’s license, two of my 16-year-old buddies, Bruce and Jerry, decided we’d like to race stock cars in an empty field next to Jerry’s house. We agreed no one could spend more than $100 for a jalopy. I got wind of a 1937 four-door Studebaker being sold in our town … for $100. It was used by a mom to drive her three kids to the town’s swimming pool four miles away. The kids loved that big car and named it Stanley, but the family needed more room in their garage and wanted to get rid of it.

I bought the car and drove it to Jerry’s home. The three of us had decided to remove all the glass in the cars and to move the gas tanks to a more protected place inside the cars. I also intended to reduce the weight of the car by cutting off the fenders and those two big bullet headlights. My tools were a hacksaw and a sledgehammer. I can feel all you classic car buffs squirm as you read this, but just remember, that’s what those 1950s stock cars were, old autos modified to dash and crash.

The selling family decided after I had driven off with Stanley, that they really ought to remove the license plate, so later that afternoon mom and the kids pulled into Jerry’s driveway to retrieve the plate. I was performing surgery with the sledgehammer at the time. Stanley was in sad shambles. The windows had been punched out and the rear fenders and running boards had been amputated. The kids wailed in alarm. Poor Stanley. I really felt badly that the kids had to see that.

Wearing football helmets and straps tied to door frames as seat belts, we had a few exciting afternoons. However, our three cars kept breaking down and never all ran at the same time. It wasn’t many weeks before they were towed to the junkyard and sold for scrap—I think I got $10.

My next car purchased a year later was a 1942 Ford Tudor Business Coupe—the last year Ford made civilian cars until after WW II. I’d use the car to drive to school since my private school did not have bus service. I can’t remember how much I paid for the car but my dad said whatever it was, I paid too much. He thought the car was junk. He wasn’t far from wrong. The car threw a rod the first week I owned it. 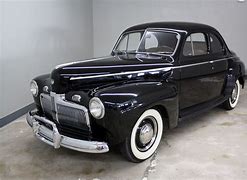 Not a problem. I bought a 1950 Mercury engine as a replacement from the scrap yard. We pushed that old Ford under a tree in Bruce’s back year, hoisted out the Ford mill and dropped in the Merc. Motor mounts lined up exactly. Now I had a hot rod. That car was fast.

I hadn’t told my dad about the transplant. Our home was located at the top of a long hill near Bridgeport, Connecticut. The hill was named Sport Hill and the Locomobile Car Company, manufacturing cars in Bridgeport from 1900 until 1929, used to test its cars on Sport Hill. One evening as I was just starting up the hill, I saw that the car in front of me was my father driving our family’s new 1957 Ford Country Squire station wagon. 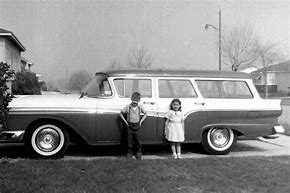 Throwing my Mercury powered speedster into second gear, I floored it and blasted past my dad like he was standing still. I was already parked in our driveway when he pulled in. “What in the Sam Hill did you do to that heap?” he asked.

“Oh, just a little tune up,” I replied smugly.

I worked at a gas station after school during those high school years. So, in addition to my shade tree engine changing ability, I learned other auto mechanic skills as well. One time my father reported my mother’s car wouldn’t start. Opening the hood, I saw the battery terminals were corroded. Without saying a word, I gave a battery cable a twist assuring good contact and slammed the hood shut. “Okay, start her up,” I told my dad. He did and it stared immediately. Dad just shook his head. Later, I tightened the battery cable properly.

My next two cars were MG sports cars, but those stories are for another time.