I also posted a story to my blog on August 3, 2018, about my correspondence with William F. Buckley. Not only did we exchange several letters, but when Buckley visited Indiana University, I was able to arrange a luncheon for him with the Dean of the School of Music and several distinguished music professors. I was included in the luncheon and spent several delightful hours with my friend, Bill.

Gordon Baxter is an aviation writer, having written several aviation books as well as a regular column in Flying magazine, Bax Seat. I wrote to Mr. Baxter telling him how after my years as a Navy pilot, I had given up flying for a brief period until motivated by the interest of three sons and his delightful magazine stories.

Baxter wrote back saying “How paradoxical to get a letter of praise from a naval aviator. To me you golden wings guys have always seem the very summit of flying skill. I’m glad your lads got you aloft again.”

Terry Anderson’s book, “Den of Lions”, tells the harrowing story of his nearly seven-year imprisonment by Shiite captors. He replied to my letter of praise by saying, “It’s my experience that most people indeed survive their time of testing and do it with some grace and dignity. The human spirit is very strong.”

Bach’s reply to my letter was written on a post card with a drawing of a bird doing loops (Jonathon?). He said, “What a lovely letter! And a moral – there’s nothing that messing around with airplanes a little can’t improve. Special warm good thoughts to your son, Eric!” 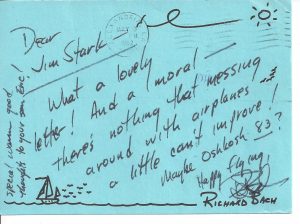 I have long considered “Blue Highways” by William Least Heat Moon to be my all-time favorite book. It’s Moon’s wonderful descriptions that I especially love, i.e. “A man with a face he’d gotten a lot of mileage out of,” or “Her clothes clung to her like tattoos.” His book “River Horse” about crossing the U.S. by boat was equally as delightful.

Moon’s reply to me said in part, “your kind words on my writing warmed my office, or so it seemed.”

I admire former President Jimmy Carter greatly, although his politics and mine have different foundations. His book of poetry, “Always a Reckoning” was thoroughly enjoyed. My letter of praise mentioned my wish to visit Plains, Georgia sometime.

Carter’s reply to me was to return my letter with his note scribbled on the bottom, “To Jim Stark, Thanks very much. We hope to see you in Plains. Jimmy C” At the top of the letter was a check mark, initialed with an “R”. Had to be Rosalynn, right? 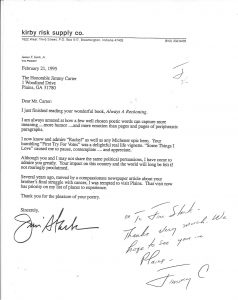 George W. Bush didn’t write a book that I responded to but as I was a great admirer of his father, President George H. W. Bush, I was moved to write to “W” after hearing his eulogy at his father’s funeral. I loved his heart felt message mixed with humor when he said “Dad was perfect—except for his short game, of course” referring to his father’s golfing skills.

George’s formal reply, sent to thousands I’m sure, included three touching paragraphs that led off with “Thank you for your sympathies.”

I love hearing from readers regarding my own minor writing efforts and whenever I send books to Amazon Books for their inventory, I always bury a business card somewhere in the pages that says, “Thanks for your purchase. I’d love to hear from you after you read the book.” I have received hundreds of emails, some from Canada and England. I write to authors because I assume, even “real” writers value getting fan mail from their readers.

4 thoughts on “Letters to Authors”