The book “The Expendable” by John Floyd describes the period of time in the Philippines immediately before and after war with Japan was declared. Prior to Japan’s Pearl Harbor attack, the U.S. suspected the Japanese were gearing up for an attack on the Philippines and ordered a Navy aircraft squadron to fly surveillance patrols over the Philippine Sea tracking increased Japanese warship movements. Fourteen PBY amphibian aircraft comprised squadron VP-21.

That got my attention because twenty-five years later I became part of VP-21 stationed in Brunswick, Maine. I knew according to my squadron history that our squadron had been commissioned in 1943 and originally flew PB4Ys. Turns out, there was no direct connection between the two VP-21s. The Philippine squadron later changed its designation to VP-101. My Maine squadron was first designated VPB-111, later becoming VP-21. The PB4Y Privateer was a dramatically different aircraft than the PBY Catalina, the latter being a two-engine amphibious aircraft often used in air/sea rescue, whereas the PB4Y was a four-engined land-based airplane.

Other coincidences were discovered in the book. In addition to aircraft flying patrols tracking the Japanese, a squadron of PT boats was also making surveillance patrols. MTB Ron 3 (Motor Torpedo Boat Squadron 3) consisted of eight PT boats. My father was a PT boat skipper in World War II and was stationed in that same Southeast Asia theater of war.

The title of the book I was reading “The Expendable” refers to the PT boats. PT boats were fast with a top speed of 48 knots (55.48 mph). The boat carried more firepower per pound than any other sea going craft in the Navy. It had a 40 mm cannon aft, twin 50 cal. machine guns port and starboard, 30 mm machine guns forward, four MK VIII torpedoes in tubes and four torpedoes in racks, depth charges, mortars, rockets, a smoke generator, small arms, and hand grenades. It had three V-12 1,500 hp engines. The boats were made of plywood and were expected to charge into the enemy fleet at high speed, release their torpedoes and escape … if lucky. The Navy considered them expendable. 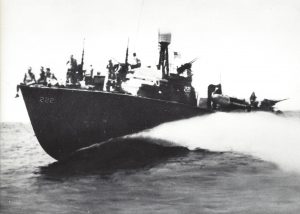 General MacArthur, Commander of Army Forces in the Far East was headquartered in the Philippines. When an imminent attack by the Japanese became apparent, he was ordered by Washington D.C. to move his headquarters to Australia. MacArthur chose a PT boat to make his secret departure. Four PTs escorted the General, but only one boat survived the trip.

My father got into the war late. He had been working for General Electric in Washington as a liaison between the Pentagon and the war department for procurement of GE’s electrical materials when he volunteered to enter the service. After commissioning as an officer under the V-7 plan, he was on his way to his duty station in the Pacific when in he learned of the victory in Europe. However, there was still a war with Japan to fight and indications were the Japanese would not surrender as long as they had one last man standing.

My dad followed one other notable PT boat Navy man, John Fitzgerald Kennedy. Kennedy received his officer’s training at Northwestern University. My father received his training at Princeton University in New Jersey. Both went for further instruction in Miami, before attending the Motor Torpedo Boat Squadron Training Center in Melville, Rhode Island. Kennedy got orders to MTB 2 in the Solomon Islands. It was there while on patrol on PT 109, that his boat was accidently rammed and cut in half by a Japanese destroyer. Kennedy’s heroic 5-hour swim while supporting a crewmate was a feat celebrated in legend and song and earned Kennedy the Navy and Marine Corps Medal for heroism.

My dad’s orders took him to MTB 16 operating out of New Guinea, a short distance from the Solomon Islands. New Guinea is about halfway between the Philippines and Australia. There he served as executive officer, later skipper of PT 222. The war ended not long after my father arrived in New Guinea, but hostilities continued since many of the enemy on the surrounding islands didn’t get the word. 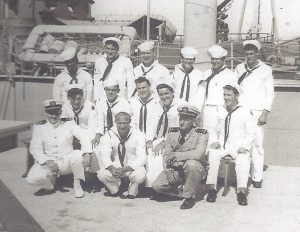 My father’s heroic rescue of a friendly coast watcher was told in this blog “Life Threatening Rescue” on Oct 10, 2018. Another story of a SNAFU “Situation Normal, All Fouled Up” was his transfer to a minesweeper and was featured in a local newspaper story on Memorial Day 2019. GIs will recognize my substitute use of the word “fouled.”It’s a similar acronym to FUBAR “Fouled Up Beyond All Recognition,” mentioned in the movie Private Ryan. 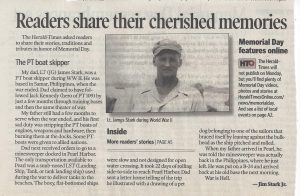 I’m proud of my dad’s service and so pleased my mother kept all his letters which I was able to transcribe into a treasured journal.

13 thoughts on “Coincidences of WW II”