My company newsletter, the Weekly Brief which I started in the early 1980s, included stories related to our electrical wholesaling business, such as sales successes, new products being introduced, and customer information. However, by far its most popular feature was employee recognitions. The newsletter was distributed company-wide every Monday and I must admit when the Weekly Brief arrived at the desks of our employees, business came to a halt.

The back page of the newsletter included a calendar which listed upcoming sales meetings and other scheduled business affairs. It also showed employee’s birthdays and employment anniversaries. As popular as the calendar was, the first read by all employees was the Atta Boy/Atta Girl page. My rule for giving this recognition was simple. If anyone felt a fellow employee did ANYTHING commendable or worthy of mention, regardless how minor, they would receive Atta Boy/Atta Girl recognition in the newsletter.

In addition to the newsletter mention, I had a button making machine. Each week I would produce Atta Boy buttons for the person named in the newsletter. The buttons would be pinned to that person’s newsletter when distributed. Atta Boys were awarded company-wide, and it always brought a smile to my face when visiting different branches to see these buttons pinned to the walls of employees work spaces. 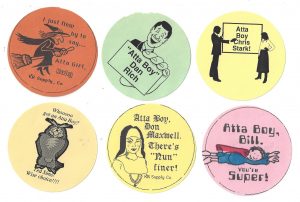 Cu stomers and vendors received Atta Boy awards as well. For those recipients in addition to the buttons, I had ballpoint pens created with the inscription “Atta Boy” and our company logo. The president of our company was in an airport one evening waiting to board a flight when he reported a manufacture’s rep who called on our firm saw him and ran across the waiting area shouting enthusiastically telling him about the button and pen he received in recognition for some good service he had provided.

My wife Michele worked for our company as a showroom supervisor back in the 1980’s. She still has her Atta Girl buttons. I suspect other buttons are still found among employee’s keepsakes. These buttons cost pennies to produce but you would have thought I was handing out one-hundred-dollar bills.

Other recognitions appearing in the newsletter were Bell Ringer Awards. As an electrical wholesaler, some of our sales for large construction projects amounted to hundreds of thousands of dollars. Other sales for a single electrical product might only be for a few dollars. I was aware that our inside salespeople often didn’t react differently when making these varied sales.

For that reason—and mostly for fun—I purchased a small brass patio bell that I mounted on a plaque and hung in each of our inside sales offices. The inscription on the plaque read: “For sales of $1,000 ring the bell once, for a $2,000 sale ring twice, and so on. For sales of $100,000 ring like crazy and keep the bell!” Bell Ringers and the salesperson making the sale were reported each week in the Weekly Brief. Within a few months, every inside salesperson had their own $100,000 patio bell proudly hung in their work cubical. 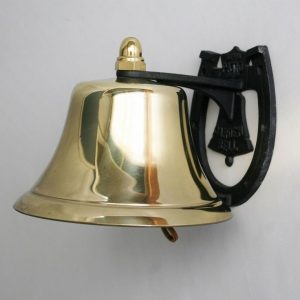 I learned the value of individual recognition was immeasurable. Letting employees know they were doing a good job and they were valued was especially appreciated when noted by a small memento of acknowledgement.