I was reading a novel that took place during World War II in which one of the characters in France was driving a Peugeot propelled by a wood burning fireplace mounted off the rear of the car. No kidding. Gasoline rationing was such a limiting factor in those war years that thousands of vehicles were using wood gasification vehicles. I had never heard of such a thing.

In 1942 Sweden had 73,000 woodmobiles. France had 65,000, Finland 43,000, and there were similar numbers in other European countries. Petrol stations were set up to sell firewood. Why had I never heard of these obviously common systems? How did a firewood system work?

Doing some internet homework, I learned that the heat generated by burning wood consumed oxygen leaving a combustible gas of carbon monoxide, hydrogen, and small amounts of methane. The combustible fumes were routed to the carburetor which, with only minor modifications ignited and drove the pistons similar to ignited gasoline.

Wood gas had a low energy content which therefore limited speed, acceleration, and range. And the size of the wood gas generators as seen in the picture below in a modern Volvo was a limiting factor. Such equipment could easily weigh over 1,000 pounds. However, if you didn’t mind driving around with a back seat full of firewood, you could motor around the world with only a saw and an axe. 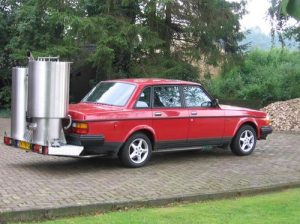 Unfortunately, wood gasification consumed large quantities of wood. If we were to convert every vehicle, or even a significant number, to wood gas, all the trees in the world would be gone and we would die of hunger because all agricultural land would be sacrificed for energy crops.

The following are a few pictures of wood gasification autos. 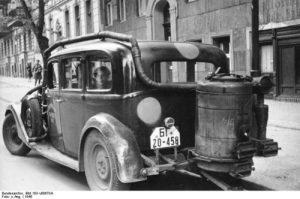 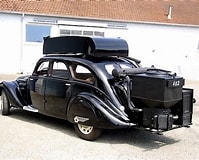 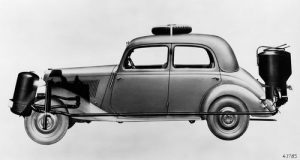 One thought on “New Discovery”