I listened to a recent podcast about prehistoric Neanderthal habitation on the Rock of Gibraltar 50,000 years ago and found it to be fascinating. Birth rates among Neanderthals couldn’t keep up with their death rates and the ancient race disappeared 10,000 years later. However, it was discovered that the caves of Gibraltar in which stone tools, fire hearths and animal bones were found were also discovered to be used by other prehistoric homo sapiens, the most recent being Phoenicians around 950 BC. What an interesting ancient history.

Most folk’s only familiarity with Gibraltar is its image as the logo for the Prudential Insurance Company. 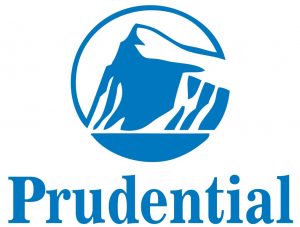 I am quite familiar with the Rock, having been stationed in Rota, Spain in 1964 and again in 1966. We used to fly by its 1,400 foot peak when entering the Mediterranean on our daily patrols searching for Soviet submarines.

Gibraltar is a small 2.6 square mile British peninsula attached to the southern coast of Spain. Britain and Spain have arm wrestled over Gibraltar’s sovereignty going back to 1704 when Anglo-Dutch forces first captured the Rock from Spain. The territory was ceded to Great Britain in perpetuity under the Treaty of Utrecht in 1713, but control has continued to be a point of contention ever since.

Located only 8.9 miles from Africa at the western entrance to the Mediterranean Sea, the Strait of Gibraltar is strategically important since half the world’s seaborne trade passes through this choke point. As small as the Gibraltar landmass is, folks are surprised to learn it has a population of 34,000 and is a vibrant city of hotels, shops, and restaurants catering to a bustling tourist trade.

I had two up-close-and-personal experiences on Gibraltar. The first in 1964 was a visit with my wife who had accompanied me to Spain during my first Navy deployment. Gibraltar was only a few hours car drive from my Navy base. My most vivid memory of that visit was taking a tour to the top of the Rock and seeing scores of monkeys roaming freely on the grounds.

Originally from the Atlas Mountains of Morocco, the Barbary Ape population in Gibraltar is the only wild monkey population on the European continent. Although most Barbary monkey populations in Africa are experiencing decline due to hunting and deforestation, the Gibraltar population is increasing. Currently, some 300 animals in five troops occupy the Upper Rock area of the Gibraltar Nature Reserve, though they make occasional forays into the town. As they are a tailless species, they are also known locally as Barbary apes or rock apes, despite being classified as monkeys.

The animals are quite used to people and will boldly reach into tourist’s pockets searching for food or other trinkets. More than one visitor has had his camera lifted by its strap off his shoulder, never to be seen again.

My second visit to Gibraltar was rather exciting. We landed our airplane there. I can’t remember the purpose for that visit but it must have been to meet with the British military. Gibraltar’s airport has a runway that is built at right angles to the causeway connecting Gibraltar to Spain. The runway is only 5,400 feet long and extends into the Mediterranean Sea at one end and into the Atlantic at the other. 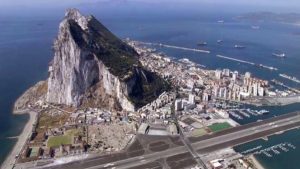 Our 30-ton airplane (empty) can land and stop in 5,000 feet but most of our runways are generally 8,000 feet long. Landing into the wind is also important but Gibraltar has no choice, it only has the one runway. I was in the co-pilot seat on that flight and not in command. However, you can bet my hands were poised to grab the propeller reversing levers and my feet were reaching for the brake pedals.  We stopped with yards to spare but the watery end of that runway seemed to rush toward us as our reversed engines roared bringing us to an anxious stop.