Sparked by an old obituary saved by my Grandmother Stark about my great, great, great grandfather, Ebenezer Stark, launched me on a research project involving 15-years of hours spent in university library stacks and trips to Cleveland where Eben settled as a pioneer with his family from Connecticut in 1814. That was just a year after Admiral Perry’s historic victory just offshore on Lake Erie during the War of 1812. That history was the subject matter of my historical novel, Great Lakes Skipper.

Connecticut and the rest of New England were sympathetic supporters of the anti-slavery movement. Not surprisingly, Eben as a young ship captain on the Great Lakes had joined and financially supported the Cleveland Anti-Slavery Society. 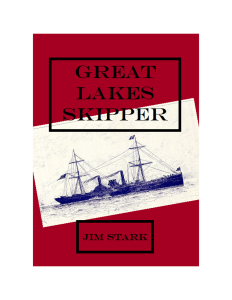 My historic novel, used actual facts, characters, and history in its telling. However, there were imagined descriptions and conversations in the relating. The characters mentioned for the most part were factual and documented by footnotes. They included Will Passion, an actual infamous slave catcher; John Brown, an intelligent, successful land investor who was a black barber with a shop in the New England Hotel; and John Malvin, the black pastor of the integrated First Baptist Church of Greater Cleveland and one of the original signers of the Cleveland Anti-Slavery Society charter in 1836. One of the fictional characters was “Hosanna,” a conductor on the Underground Railroad in my story whom I modeled after Harriet Tubman of Underground Railroad fame.

My narrative reports that Eben and his ship, Avenger, were recruited by John Brown and John Malvin to carry sixteen escaping slaves to Canada.  Eben agreed, although he realized he risked the loss of his ship if discovered by slave catchers who used Federal Marshals to return slaves to their owners in the south.

Will Passion, the notorious Slave Catcher, was on the lake in his swift schooner the night Eben sailed, looking for boats sneaking out of Cleveland harbors heading for Canada.

Eben’s ship, with the former Virginia slaves hidden in the crew’s quarters and their conductor, Hosanna, were chased down and overtaken by Passion’s faster schooner, but Eben had cleverly altered course prior to being boarded by Passion and the Marshalls.

After boarding, the marshalls announced their intention to search Eben’s ship looking for property owned by United States citizens.

Eben replied, “In the last several minutes, our ship has departed the U.S. and entered Canadian waters. You no longer have jurisdiction in these waters.”

Passion and the Marshalls after making some frustrated threats, had no choice but to abandon their pursuit of the slaves and depart.

Captain Ebenezer Stark safely disembarked sixteen former slaves to freedom on the shores of Port Burwell, Ontario. As Hosanna departed, she said to Eben, “We are deeply appreciative, Captain. You are a skillful skipper and navigator. I had no idea we were so close to the Canadian border.”

Eben replied, “To tell you the truth, ma’am. I have no idea where that line lay in these waters. But I was convinced the Marshalls didn’t either.”

We are so proud of you, Captain Stark.