It was called the SERE Course (Survival, Evasion Resistance and Escape). All Navy, Marine and Air Force combat pilots went through the course during the Vietnam years. The Navy had two school sites, one in California on the west coast, and the other in the wilderness of northern Maine. I received orders to the Maine school.

The week-long course started with two days of ground school during which we were taught survival techniques and an introduction to the Code of Military Conduct about how to conduct ourselves as POWs. Initially our group of 35 pilots began the experience in a lighthearted manner, like kids going on a picnic in the woods.

That attitude changed quickly, convinced that the training exercise had somehow gone terribly wrong. Initially dropped off in the deep woods of Maine with instructions to spend two days following a compass heading to a partisan camp, we were to forage for food and avoid capture. The enemy, dressed in foreign uniforms, and firing machine guns, was in hot pursuit. Our capture on the second day included brutality and apparent bloodshed. How could this possibly be a U.S. Navy training exercise?

After our capture, we were trucked to a barbed wire enclosed POW compound with machine guns protruding from watch towers and sweeping search lights piecing the frosty night air. The real horror had only just begun. Our defense was the guidelines learned in the Code of Military Conduct. 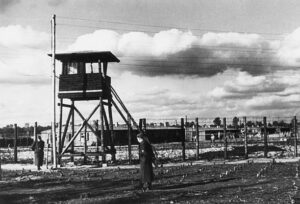 If I am captured, I will continue to resist by all means available. I will make every effort to escape and to aid others to escape. When questioned, I am required to give name, rank, service number, and date of birth. I will evade answering further questions to the utmost of my ability. I will make to oral or written statements disloyal to my country and its allies or harmful to their cause.

The interrogations, carried out individually, were ruthless. It was hard to believe that we cocky aviators, boasting over beers at the O’Club about our airmanship and derring-do could be reduced to puppets, jerking at every pull of the strings so quickly. My Achilles heel was a 3’X 2’ box about half the size of a coffin in which I was thrown when refusing to give information. I barely fit. I thought my trick would be to scrunch down as small as possible so that when the lid was closed I could expand. But the lid wouldn’t close unless one of the guards sat on top, forcing it down. My legs were crossed under me with the calf of one leg pressed against the bone the other. Stabs of pain in my neck shot through my back and numbed my shoulders. With my chest compressed I could only get air in short breaths. I started beating wildly with my fists on the inside of the box. The top opened. “Are you ready to cooperate, Lieutenant?”

Back in the box. That jack-in-the-box routine—beating on the sides, opened top, refusing information, and then being sealed up once again—repeated itself over and over for what seemed like forever.

Finally, my tormentors grew tired of the game and threw me into a shallow grave filled with rocks and flooded with water. The hollow was covered with a sheet of plywood weighted down with stones that offered only a few inches of space between the pit bottom and the plywood.

Surprising as it may seem, I liked it. “Oh, please God, let me stay here forever. I’m numb beyond feeling so the cold doesn’t bother me and the stones are nothing….but please, please, don’t let them put me back in that box.”

Eventually I was released and returned to the compound. The next 24 hours were horrific. After five-days, the discomfort of hunger had faded, but the cold was insufferable. No longer shivering, our bones just ached with the deep chill. All questions about a training exercise or simulation had vanished. Whatever the explanation for this experience, it was as close to Hell as any of us could imagine.

The Navy had done its job well in teaching us the tenets of the Code.

Nothing had gone wrong, and we had not been hallucinating. It was rough to be sure, but much of what we experienced was staged and made even more believable with make-up and skilled actors. Without this training experience, we might forget the code’s guidelines. Perhaps the enemy in northern Maine had won the encounter, but those companions unfortunate enough to repeat the experience in some foreign land would be much better prepared.

How did it end? We all failed the final test in that prison compound. We failed, as every other group taking the SERE Course had failed. Every class ended the same way. The rule emphasized repeatedly in the pre-exercise instruction was not to riot and rush the guards. It would be suicide. The towers with their machine guns would kill every POW.

The last captive to be interrogated that week was a pilot from one of the Norfolk squadrons. When he was returned to the compound, he was dragged to the fence by the guards, apparently bleeding from multiple wounds. It looked like he had been in a car accident. The guards spat upon him and gave him one last kick. That’s when someone in the compound yelled, “Get em!” and all of us forgot our instructions and charged the guards.

At that moment, the Star-Spangled Banner began playing over the loudspeakers and American flags unfurled from the watch towers. The exercise was over. The nightmare had ended … and we wept uncontrollably.

I am an American, fighting in the forces which guard my country and our way of life. I am prepared to give my life in their defense – The Code.