Fort Sumter, a Union garrison in Charleston Harbor was fired upon by Confederate forces in 1861, announcing the opening salvo of the Civil War. Union forces retaliated by forming a blockade of ships in the harbor and bombarding Charleston with constant artillery fire.

The southern forces in Charleston, starving and woefully short of supplies because of the blockade, built a submarine, the HL Hunley, to challenge the blockade and attack the Union ships, hopefully opening the harbor for needed supplies.

The Hunley was not the first submarine built. The “fish boats” as they were called, were small, in comparison to undersea craft of WW I and WW II. The boats had no undersea oxygen systems and could only stay submerged an hour or two as long as fresh air lasted in the watertight confides,. Few of the early subs survived their initial missions. 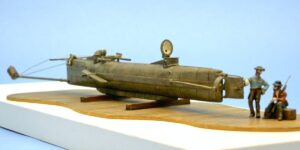 Weapons were called torpedoes, but unlike modern day self-propelled projectiles, were basically bombs mounted on the end of spars attached to the front on the fish boats and rammed against the hull of an enemy ship. 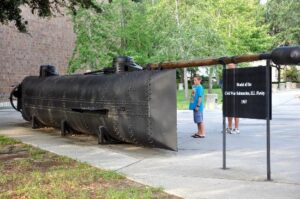 Propulsion of the submarine was provided by the crew of seven turning hand powered cranks to drive a propeller. A captain controlled the boat’s rudder and course by observing forward direction from a front window in the forward turret. The sub, only 40 feet in length, had two turrets, which when open on the surface were the source of oxygen and fresh air.

The target on February 17, 1964, was the Union ship Housatonic. Prior to the attack, the sub, running near the surface with its turrets exposed, was spotted and fired upon, but it dove, successfully implanting its torpedo under the hull of the Housatonic and blew it out of the water. One hundred Thirty-five pounds of black powder blasted the hull of the Union ship and sent it to the bottom.

But what happened to the Hunley? Its successful mission was supposed to have been signaled back to Charleston by flashing two blue lights to be answered by lights showing the way home. The Hunley never returned. Did the exploding torpedo damage the Hunley? Was the crew asphyxiated by remaining submerged too long? Did defensive shots from the Housatonic damage and sink the Hunley? It was a one-hundred-thirty-year mystery.

The Hunley sank to the bottom with eight dead crew members in thirty feet of water, it’s location unknown. Over the years, Charleston harbor was reconfigured and dredged with the sub now becoming buried in additional feet of mud and silt. One hundred-thirty-six years later in 2000 the novelist Clive Cussler funded an exploration which discovered the location of the Hunley, and it was raised. The sub had filled with mud and silt by this time, but skeletons of the crew were fully preserved.

The mystery was that anyone suffering from suffocation or drowning would normally panic and attempt to escape crowding the escape hatches. This crew, its skeletons reveled, were found at their stations, legs casually crossed at the ankles, seemingly unconcerned.

The author of In the Waves, Rachel Vance, a research student at Duke University, challenged the mystery in her research with chapter long descriptions of her experiments with black power shock waves and pressure damage trauma. I must confess to skipping some of her detail of biological and technological experiments. However, it was her discovery and proof that the exploding black powder caused a pressure wave flexing of the skin of the sub. The pressure wave inside the sub penetrated the skin of the crew and burst blood vessels in the lungs and the surface of the brains. Breathing and brain function stopped suddenly even though neither tissue nor bone damage had occurred. 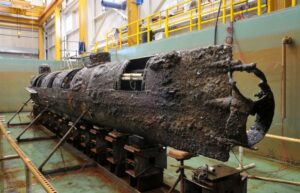 The recovered remains of the Hl Hunley are on display at the Warren Lasch Conservation Center in North Charleston, South Carolina. It’s on my list of future road trip explorations.