The remake of the blockbuster hit, Top Gun, now titled Top Gun, Maverick, had dusted off a 60-year-old Tom Cruise and brought him back as an older but still youthful looking Maverick, as played in the original movie 36-years earlier.

Maverick wears his khaki and dress white attires with distinction. Damn, I loved wearing those uniforms. What smug pride it was to venture off base and watch heads turn as I shopped in the civilian world. Leather flight jacket, aviator sunglasses, hell yes, I was one Hotel Sierra naval aviator. 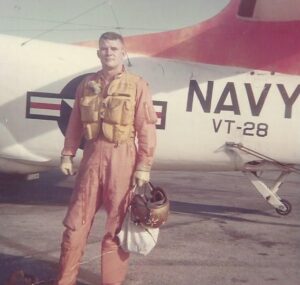 The Top Gun film makes Navy life seem endlessly breathtaking and exciting. However, there was no mention of the long boring nights standing watch as OOD, or the tedious, repetitive, paperwork we all had to deal with daily. A squadron of 300 officers and men required tons of administrative busy work in addition to flying responsibilities.

The film makes no mention of the stress of Prefight training at the hands of merciless Marine Drill Instructors. See Officer and Gentleman starring Richard Gere for an accurate portrayal of that harassment.

Maverick and his RIO (Radar Intercept Operator), Goose, were best buddies. Goose, the back seat non-pilot, dies when their aircraft enters a flat spin and crashes. That rang a bell. A flat spin is one in which the aircraft has its control surfaces blanked out aerodynamically and is often unrecoverable. I experienced a flat spin. That memorable day, after several ominous rotations, I was reaching for the canopy jettison handle and feeling for my ripcord when the airplane unexpectedly stabilized, and I regained control. Whew. 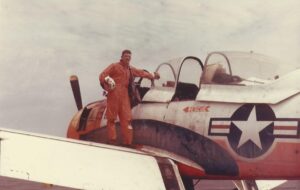 Maverick’s relationship with Goose reminded me of my camaraderie with Warren Scoville. I was Warren’s wingman when formation flying in T-28s. We were good—damn good, in fact. Flying 36-inches apart, wingtip to wingtip, somehow I was always able to anticipate Warren’s turns, climbs, and speed brake applications a split second before he executed them. We hung our planes together like they were attached by wires. Warren had a successful career after the Navy as an attorney and then unexpectedly took his life. So tragic.

In the original movie, Maverick shot down three enemy aircraft. How very exciting. We didn’t shoot at the enemy during the Cold War but being jumped by Russian MiGs during the Cuban Crisis and tracking Soviet submarines was a similar adrenalin rush. Our training involved dropping bombs, launching rockets, and firing 50 caliber machine guns hung from pods under our wings. The pumping of those 50 cals, sending visible tracers toward a target drone as we dove down vertically was heart racing.

Mavrick’s love interest reminded me of the young ladies attracted to our Officer Clubs and favorite watering holes near Navy bases. The memory of Ginger, a middle-aged floozy in Pensacola’s Trader Jon’s bar, brings a smile to my face. To read about that innocent encounter, see page 10 of my book, Two Turning, Two Burning.

What a proud, wonderful experience the Navy was. I loved it. I was no Top Gun fighter pilot but being a Patrol Plane Commander (PPC) of a crew of eleven who trusted me to fly them across oceans, through challenging weather conditions, and into threatening hostile environments, was about as good as it got.