In 2004, a year prior to Hurricane Katrina, I volunteered to become a Red Cross disaster worker. My motivation that year was the hurricane emergencies in Florida. I envisioned myself driving an airboat and rescuing stranded families from rooftops. Oops, not so fast, I learned. Qualifying as a Red Cross volunteer required certification, and training, training, training. I signed up, took a physical and spent a number of evenings in classes taking such courses as Introduction to Disaster Services, Mass Care, CPR, and First Aid. I jumped thru all the hoops but the closest I came to actually seeing a victim was to accompany other volunteers who did local follow-up visits with Indiana families burned out by home fires. That was not the heroic involvement I envisioned. I therefore put the Red Cross on my back burner.

The following year, on August 31, 2005, hurrcane Katrina, the largest tropical cyclone on record, slammed into New Orleans, killing 1,836 people, flooding New Orleans, and causing over a hundred billion dollars’ worth of damage. I received a call from the Red Cross, “If you can do anything to help us, we can really use you now.” 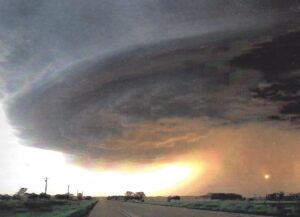 “Will you deploy me?” I asked.

“Absolutely!” was the reply.

Thus began another series of classes and ever-changing communications. Anyone with a military background understands the expression, “Hurry up and wait.” The bureaucracy of the Red Cross contributes to that uncertainty and confusion. But that in no way reflects the altruistic nature of the Red Cross workers. The volunteers are incredibly dedicated humanitarians, sincere about helping those affected by natural or man-made tragedies.

I was eager for my deployment adventure. Expecting to be sent to New Orleans, Mississippi, or Alabama, I got my tetanus and Hepatatis shots, packed my sleeping bag and tee shirts and was ready to go. When the call came it was to assist at the Resource Center in Falls Church, Virginia—that’s Washington D.C. What the heck was that about!

The Red Cross headquaters in Falls Church had a 24-hour 1-800-Get-Help phone operation. Because of the enormous impact of Hurricane Katrina, thousands of calls were coming into the center for help. Volunteers were needed to staff the lines 24/7. Okay, no airboat heroics. I was going to be taking calls from Katrina.

The telephone training in D.C. involved honing our computer skills. Using the computer at each phone station while taking calls, you needed to know how to cut and paste, search Google, drill down through layers of documents, and understand computer lingo. 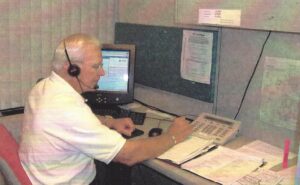 How do I get my medicines replaced?

How do I file a FEMA claim?

How do I find a lost relative?

Where can I find a shelter?

How can I get food?

How can I replace my eyeglasses?

Where can I stay with my pets?

How do I get that free money the Red Cross is giving out?

Where can I get clothing?

I think I am going to kill myself.

There were medical practitioners and folks with psychological expertise on our floor. They were there to not only take over the phone to deal with victim’s trauma, but to help the phone handlers as well. The eight-hour shift was stressful. One of the volunteers had a heart attack while taking calls. Not only were we confronting life and death matters, but the first issue was dealing with very angry people. Many had been on the phone—ON HOLD—for hours.

We had 100 phone handlers working each 8-hour shift, yet my computer screen showed there were often never less than 300 calls waiting to be answered.

One very irate caller reported she had been on the phone calling the financial assistance 800-number for 24-hours and it either rang busy, or was put on hold, and only later disconnected. By the end of my first hour, I was exhausted. How was I ever going to do this for eight hours a day?

I developed a script of words that seemed to bring reassurance and understanding. Many angry callers eventually signed off by saying, “Thank you so much and God bless you, Mr. Jim.” Unfortunately, my reassuring verbiage took ten to fifteen minutes to work through. As soon as I brought one caller to a level of normalcy, they hung up and I was immediately into the next irate call. This was without a doubt, the hardest thing I’d ever done. But, at the same time, I felt like I was rather good at it.

One of the training methods used was to let new volunteers shadow (listen in) with an experienced phone handler. I was constantly having folks listen in on my calls. Then I noticed it wasn’t just new volunteers, but supervisors as well.

“We hear you’re pretty good at this and just wanted to hear you.” Some said it was my deep, male voice that victims found reassuring.

The computers at each phone station had links to 100s of resources and websites we could use to resolve victim’s issues. The thing we couldn’t do was provide financial assistance. That was handled by the Financial Assistance Phone Center located in a different building. It also had 100 phone handlers taking calls. We learned they were getting 2,000 phone calls each hour.

I felt good about the job I was doing, but I thought, wouldn’t it be even more satisfying if I was actually giving out money. The scale of financial assistance ranged from $350 for one person to $1,560 for a family of five. After a week in the Get Help Center, a call went out for volunteers willing to transfer to the Financial Assistance Center. Yes, I’m your man.

Normally qualification to receive financial assistance was determined by local Red Cross chapters but in the case of Katrina victims, it was going to be done over the phone using “Choice Point”, a rather sophisticated software. The concern was to validate the person calling was actually who they said they were, and secondly since benefits were only available in certain disaster areas, to verify the caller lived in the appropriate zone. Practicing with the software, I put in my own telephone number with no name, and no social security number. Suddenly the screen was filled with my Bloomington address, the Florida address where we spent every winter, the address of an investment property we owned, and the dates each of those properties was acquired. In addition to my name, under the heading “also known as” was: Jim Stark, James F. Stark, J.F.Stark, James F. Stark Jr. and a half-dozen more. Big Brother certainly had his eye on me.

After financial assistance is approved and waiting to be sent via Western Union, it is vitally important that names be spelled correctly. The southern Cajun culture and accent made this a challenge. With names like Chicerah, Jekeisha, Zsakiyla, and Chrisynthia, I needed my callers to spell their names VERY slowly.

Just hearing and correctly recording address numbers and zip codes was difficult. One afternoon I had a good ol’ southern boy listening in on my calls. Oh good, I thought. I’ve got someone here to translate for me. A call came in that was extremely difficult to understand. Jotting down the zip code, I wrote 74320. My listener said, “No man. She say, seben, oh, tree, tu, foe.”

People were appreciative of the money of course, and therefore their attitude was much different than the callers into the Get Help line who were venting their frustrations. It was the change that I wanted, however after a couple nights of handing out financial assistance, I began to miss the challenge of problem solving, hand holding, and amateur mental health counseling. Prior to my fourth night in Financial Assistance, I met with my supervisor and requested a transfer back to the Get Help phone center.

It wasn’t easy to transfer back. Supervisors were very possessive of their volunteers. “You mean you don’t think you are helping these people?” she challenged.

“Yes, but I feel I was being more helpful in the Get Help center.”

As a result, I was able to spend the remainder of my three-week deployment responding to a variety of traumatic, desperate, some inspirational, some shocking, phone calls. Here’s just a few of the hundreds of phone calls I took: 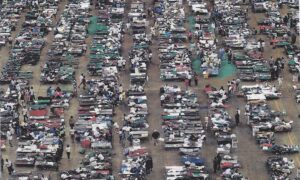 The suffering continued in the Gulf Coast states for many more months. Those of us who have not experienced the loss of our home, our clothing, our family photographs, our ancestor’s heirlooms, our stuff, cannot truly imagine it. As I returned to the comforts and luxury of my well-ordered life, I pledged to remember those calls from Katrina and appreciate my good fortune.

4 thoughts on “Calls from Katrina”