My gypsy life began almost immediately after I was born in 1938. From then throughout the 1940s, although we moved from Connecticut, to Maryland, to Virginia, to Missouri, to Nebraska, and to Washington D.C., I spent the summers during those years with my grandmother at her cottage on Lake Wawasee, near Elkhart, Indiana.

Lake Wawasee, named after an Indiana Chief, was Indiana’s largest natural lake. Its surface covers 3,000 acres. My grandmother’s cottage was located in Oakwood Park on the west shore of the lake. The Oakwood Inn faced the largest open water section of the lake, and one could just barely see the luxury Sphinx Hotel on the far shore that boasted to occasionally hosting the gangster Al Capone from Chicago.

Gad, I loved Wawasee. From the time I was four until the age of twelve, I took off my shoes in June and was barefoot until the end of August—that’s just a slight exaggeration. My best friends Marc and Roger were great companions and co-conspirators for numerous pranks and shenanigans.  Grandmother’s rules were reasonable; wait one hour after eating before swimming, no more throwing apples at old lady Hacker’s cottage, and be home when the park lights turn on.

One of my memories is ringing the tabernacle bell on September 2, 1945, in celebration of our victory over Japan and the end of World War II.

My family moved to Connecticut in 1948. Bridgeport had a large General Electric plant and was the location of dad’s new office. Connecticut’s Largest freshwater lake was Lake Candlewood. It was in the western part of the state abutting the towns of Brookfield, Danbury, New Fairfield, New Milford, and Sherman. The lake covered 8.4 square miles.

I first discovered Lake Candlewood by attending a Boy Scouts camp there for a few years. The lake was only an hour from our home in Easton and my parents rented summer homes on Candlewood. I recall at least four different rental houses. Then in 1955 dad found a property for sale on Candlewood and bought it for $30,000. The property was on Candlewood Isle, an island in the lake connected by a causeway to shore.

The island was very hilly and our main house was at the very peak of the island some 200 feet above the lake’s surface. It was considered lakefront property even though one had to descend a winding downhill path 300 yards through the woods to get to the lake. The four-bedroom house had a log exterior and a huge living room with a large stone fireplace. In addition to the main house there was a separate garage by the road that had an upstairs apartment with a bedroom and bathroom. The property had a sizable patio looking out over the lake with a shuffleboard court. We loved that place. Dad would drive up every evening during the summer from his office. 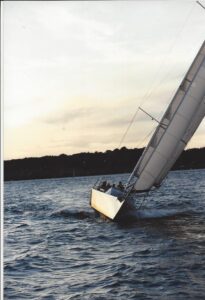 My folks kept that place for several years, even after my two younger sisters and brother finished their schooling and moved on with their lives. I was in the Navy, flying airplanes out of a base in Brunswick, Maine. One day we were scheduled for a training flight and I decided to fly down to Connecticut and do a flyby over Lake Candlewood. I had Flight Service call my mom (dad was at work) and told her to go out on the patio and get ready to wave. I descended to 300 feet, lit the jets, and flew over the house, rocking the wings in answer to mom’s waving. I’m sure we knocked a few pictures off the walls with that pass.

Lake Candlewood, just a two-hours away from metropolitan New York, became very popular with NY residents. Lakeshore cottages were being purchased for hundreds of thousands of dollars, torn down and replaced with new homes. With my siblings no longer using the Candlewood Isle home except on vacations, my parents decided to sell.  Their $30,000 purchase in1955, sold for $300,000. Almost immediately afterwards, mom and dad regretted the sale. They were so sad over the matter, mom told dad, “Go buy it back.” Contacting the realtor who handled their sale weeks earlier, they discovered the property was now listed for one million dollars!

I understand they were able to negotiate a deal for less than one million, but still paid a premium over the sales price.

After my Navy hitch and a brief period working for the future Governor of Maine—that’s a story for another time—my nomadic life settled down and I became an Indiana resident for the next fifty years. There were three moves during that period, first to Lafayette, then Columbus, and then finally to Bloomington for the last 30 years.

Ten miles south of Bloomington is Indiana’s largest lake, Lake Monroe, covering 10,750 acres. The lake was created by the U.S. Army Corps of Engineers as a primary water source for Bloomington and to prevent flood damage downstream. It is a primary recreational area for Hoosiers for fishing, camping, and boating. The Fourwinds Resort and Marina is home port for over 800 watercrafts.

Shortly after moving to Bloomington, I became a sailboat owner, spending many weekends enjoying the waters of Lake Monroe. Those delightful weekends included windy days and some calm days when we were dependent on our Iron jenny (outboard). We sailed with grandchildren, son’s Indiana University PhD classmates, our favorite minister and his wife on their anniversary, or just the two of us watching the sun slip behind the surrounding hills. I’ve sailed on the Atlantic, Pacific, Caribbean, and Aegean seas but my most memorable times are those I enjoyed on freshwater lakes.