During my early Navy years, I had a four-week assignment in a nuclear weapons school in Norfolk, Virginia. The training was top secret, so no training materials were allowed to leave the base. Most of my friends spent those free evenings at the officer’s club, but I decided it would be a wonderful opportunity to take advantage of the fully equipped base hobby shop and build a small Sunfish sailboat.

Working in the shop every night with my bride of just a few months keeping me company sitting on a saw horse, I finished the boat just in time to strap it to the top of my VW bug as we drove to my next duty station in Jacksonville, Florida. The sails I ordered had not arrived yet, so the maiden voyage would not take place until we got settled in Jacksonville.

The St Johns River in Jacksonville is huge. It is several miles across in some places and has ocean going freighters and cargo ships navigating its waters. The Sunfish was really nothing more than a surfboard with a sail and bathing suits were necessary sailing attire. My bride and I cast off from the Navy base beach and were delighted to discover the quickness of our tiny boat. 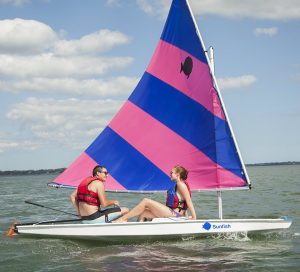 Focused on handling the Sunfish, it was 40-minutes later that I looked back toward our departure shore and discovered dark storm clouds and rain had obscured the beach. When the wind hit us, I slid off the deck to act as a sea anchor as we surfed along in the water. With one hand on the tiller and one on the mast to stay attached to the boat, the challenge was to keep from losing my bathing suit as I was dragged through the water. My wife was flat on the deck, holding on to the handrails for dear life. Her screams of alarm were not comforting.

There was no choice in the direction we were headed. The wind had the con. Up ahead, I could see we were being blown toward a large home on the shore. On the pier in front of the home I could see a woman watching our struggle. I was about to discover that this junior naval officer was about to be shipwrecked on his maiden voyage in the middle of Admiral’s Row. It was an Admiral’s wife watching our approach.

The landing proved survivable and soon skipper Stark and crew were wrapped in towels in the warmth of Mrs. Admiral’s home enjoying hot tea. Mr. Admiral, Sir, was not at home.

That same Sailfish had a number of less adventurous sails and ended up being owned by the future Governor of Maine and found a berth in front of his summer cottage. But that’s another story.

I was vacationing with my family at Disney World in Florida. We were staying in the Polynesian Village Hotel across a lake from the main entrance to Disney World. You could rent boats on the lake. One of the boats was a Hobie Cat, a small catamaran with two hulls separated by a stretched canvas deck.

While my family visited the theme park, I wanted to rent a Hobie Cat. However, the rather surly waterfront manager—very un-Disney like—said they only rented the Hobies to experienced sailors. Well, I assured the young man I was very experienced. A Hobie Cat can be tricky. In a brisk wind the Cat will get up on one hull and the crew must scrambled to the opposite side to keep from overturning. 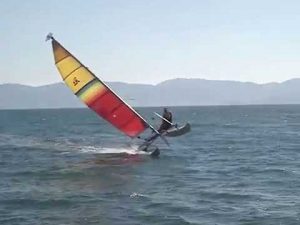 I was having a ball, flying across the lake from one side to the other. I just hoped that rude waterfront manager was watching. Also on the lake was a large paddle wheel steamboat carrying Disney patrons from the parking area across the lake to the main entrance. I imagined the paddlewheel was just for show and the ferry was probably on a rail beneath the water and pulled back and forth by a cable. Disney, I guessed, wouldn’t take a chance on winds or weather threatening its clockwork delivery of money spending patrons.

It was on one of my speedy lake crossings while enjoying the challenge of keeping the Hobie right-side up that suddenly from behind me I heard the loud blast of what sounded like a foghorn. It was the ferry only fifty feet away. Looking up I could see the faces of a two hundred passengers bent over the rail in anticipation of our collision. Pulling the tiller full throw, the Cat did an immediate portside turn out of the clutches of the advancing ferry. However, I wasn’t in position to counter the wind shift and in what seemed like slow motion the Hobie Cat raised up on one pontoon and turned upside down.

To this day, I expect most of those passengers aboard the ferry thought my upset was just part of a Disney show. As I bobbed up in the water, I thought I could see some passengers applauding. Now the challenge was to get the sailboat turned right side up. With the mast and sails underwater, you must first lower (unmast) the sail and then stand on one hull and pull on the halyard to get the mast out of the water and righted. I worked and worked but just didn’t seem to have enough weight pulling on the halyard to lift the mast out of the water.

After what seemed like a long struggle, that smart-butt manager finally motored out in an outboard. You just know he took his sweet time watching my efforts from shore before venturing out. “Thought you were an experienced sailor,” he challenged.

“Yeah, yeah. Just get the mast up on your boat, so I can get this thing turned over.”

That evening, my sons enjoyed my story of how I entertained the arriving Disney patrons.

Playing Chicken with an Aircraft Carrier

My wife and I were attending a business convention at a resort on beautiful San Diego Bay. The hotel had a marina and rented sailboats. On one of our free afternoons we rented a 25-foot sailboat to sail on the Bay. It was a lovely day and the protected bay had smooth waters.

We could see the bay’s opening to the Ocean and Michele insisted we exit the bay just to say we sailed on the Pacific. The sea was not choppy, but it did have huge ground swells, 20 to 30 feet apart that lifted us ten feet high at their peak than ten feet down in the trough between waves. It was a gentle 20-foot elevator ride and not at all threatening.

After 30-minutes and while at the top of one of the swells, we caught sight of an aircraft carrier heading into its Navy port. I was surprised that something as large as that carrier would actually disappear from view when we dropped into the troughs between the waves. We were both heading for the same bay opening. There was a significant distance between us initially but with the carrier’s much faster speed, it was quickly catching up to our piddling four or five knots. Each sighting when lifted above the waves showed the flattop closing rapidly. 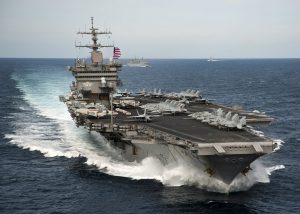 I chuckled to myself thinking of the conversations that might be taking place on the bridge of that ship. When two vessels are on the same heading, Rules of the Road at Sea dictate that a ship under sail has the right of way over a powered ship. Ha, just imagine that huge carrier having to alter course to avoid collision with our tiny sailboat. There is another unwritten rule that I learned when sailing in the Gulf of Mexico among large tankers. It is known as the “big boat, little boat rule,” and as you might guess, it suggests that little boats need to get their fannies out of the way of big boats.

It would have been an easy maneuver to make a quick turn and sail off out of reach as that grey monster powered its way homeward bound. At the same time, I was wondering how close the carrier would come before someone would give way. Michele said, “What are you doing, playing chicken with that aircraft carrier?”

No, of course not, and I did a quick 90 degree turn out of harm’s way. The answer to whether we had been noticed on the carrier’s bridge was answered when we heard two quick toots on the ship’s horn after making our turn as a thank you for getting out of its way.

In keeping with the rivalry between Navy pilots and sea going sailors, I took haughty delight in the brief consternation I may have caused my brothers in blue.

9 thoughts on “A Funny Thing Happened … on the Water”