I had caddied for my dad as a nine-year-old at his country club. Dragging his bag around for eighteen holes in my dad’s eyes was a father and son outing. I appreciated the togetherness, but it was an exhausting day. After the round he bought me a club sandwich brought to the locker room’s front steps—no minors allowed—while he celebrated with drinks with his friends inside.

In later years, my father invited me to play with him in Member Guest Tournaments at his club in Connecticut. We never did very well but it was fun to be considered his teammate at the cocktail parties and after-tournament festivities. My golfing skills—driving distance—exceeded my dad’s by that time and I loved his astonishment at how far I could hit the ball. Seeking my father’s praise and approval had always been important to me.

A significant memory for me occurred after I took a new job in Indiana where one of the perks was a country club membership. How proud I was to invite my father to be my partner in their Member Guest Golf Tournament. The club had decided for the first time to include Calcutta betting in the tournament. A Calcutta Auction invited cub members to place bets on their estimate of the winning twosomes. The wagering at the party the night before the tournament became very enthusiastic. Bets of several hundred dollars went into a pool and the pools exceeded $10,000. Team members and bettors would share in a portion of the winnings. The hazard of big pot Calcutta betting is the temptation to invite sand-bagging high handicap guests to team up for big dollar winnings. I don’t think that happened that first year, but the potential for winning big bucks was on every player’s mind and in their golf swing.

I played very well in the tournament. During our third and final round I realized that by parring the last two holes my dad and I might be in for a big payoff. Never before have I felt that kind of pressure on a golf course. I could hardly breathe. My father was not playing that well but his excitement over our chances was not helping my anxiety. “Keep it in the fairway, Jim. We need a couple more pars.”

My drives were good, but both approach shots landed just off the green. A pitch close to the pins was imperative. I stood over those 20-yard shots unable to draw the club back. I found I needed to step away, refocus, rehearse the shot, and finally without breathing swing the club. I parred the 17th hole, but the putt on 18 was a ten-footer. Come on golf gods, don’t fail me now. The ball rolled to the rim of the cup, paused briefly, then miraculously dropped into the hole. 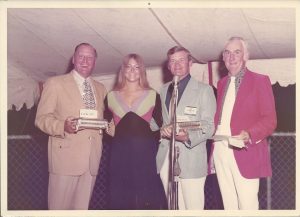 We didn’t win the tournament, but we won our flight and came in third overall. Our share of the winnings was $2,400 each. Big dollars back in 1972. Best of all was hearing my dad tell about that event over and over until his passing twenty-two years later.