My years in the Navy were spent during the Cold War era of the 1960s during which the USSR and USA had nervous fingers on the trigger of World War III. The Soviets had electronic intelligence-collecting ships, called ELINT Trawlers thinly disguised as fishing boats, stationed offshore at every Navy base from which I flew. They had ships just offshore on the East Coast from Maine to Florida, up and down the West Coast, as well as near U.S. bases in other parts of the world. The trawlers rarely were aggressive, just floated three miles offshore, monitoring Navy communications. We would fly by following every patrol, taking pictures of any new antennas they had installed. We would wave, they would wave, and that was the extent of the confrontation. Russian submarine tenders refueled the trawlers, which remained on station for months at a time. 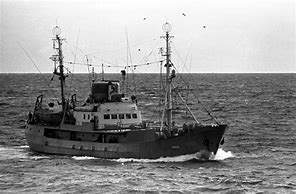 The trawler offshore at Rota, Spain, in 1965 was a different breed of cat, however. Its crew was downright confrontational. They got into the middle of our training exercises with surface ships, trying to recover practice weaponry, and would jam radio waves when we communicated with shore stations. What to do with these quarrelsome communists?

Our six-month deployment in Rota included the month of December, so we decided to give our Bolshevik friends a Christmas gift. Really, something nice, you know “hands across the sea,” demonstrating the old Christmas spirit. We filled a five-foot-long sonobuoy packing tube with popcorn as a cushioning material and into it placed several bottles of U.S. made vodka, plus a variety of American brewed beer. To share our American literature, copies of Playboy and Penthouse magazines were included. A sailor in the squadron found a model of their trawler sold at the Post Exchange and glued it together, painting the model in their colors, and inscribing their ship’s name on the stern. The pièce de résistance of our gift, however, was a condom one of our squadron sailors stretched to gigantic proportions and wrote on the side, “Made in U.S.A. – Small.”

Two aircraft made the delivery, one to drop the parachute-retarded gift, and the other to take photographs. The trawler, however, obviously aware something strange was going on, just circled the gift when it hit the water. Seeing the ship reluctant to pick up the package, the two aircraft departed. The next day, when the patrolling aircraft flew by to take pictures, the entire Soviet crew was on the deck, waving the vodka bottles and holding up the magazine centerfolds. They say President Reagan gets credit for tearing down the Berlin Wall, but I think our squadron ought to be acknowledged for at least loosening a brick or two.

3 thoughts on “The Xmas Gift”