Maybe it’s wind in my hair that has something to do with my lifelong interest in sailboats and motorcycles. Perhaps it’s that same attraction that now has me flying gliders as a member of the Louisville Soaring Club. The LSC, although most members are from Kentucky, flies out of Freeman Field in Seymour, Indiana, just an hour south of my home. I’m not speaking about hang-gliders here. I’m talking about full sized sailplanes with 40’—50’ wingspans controlled by ailerons, elevator, and rudder. 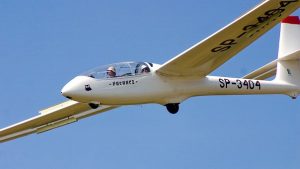 The club has 35 active members. It owns half-dozen gliders, two of which are two-place gliders allowing for flight instruction. The others are single-place planes. Several members own their own gliders.

The sailplanes are towed to altitude—generally 3,000 feet—by the club’s powered tow plane. Once released from the tow the glider pilot searches for thermals of uplifting air. I assumed gliders only flew in the warm spring and summer months, but the mild 2019 winter provided many moderate weekends that found some pilots staying in the air for four and five hours and climbing above 8,000 feet. Spoilers or airbrakes actuated in the wings bring gliders down in those instances.

Despite my military and private pilot experience, flying a glider requires special training. In addition to the unique aerodynamic characteristics, initially the instruction focuses on learning to control your position behind the tow plane—which takes a good deal of concentration I discovered—and landing practice. Once committed to landing a glider, there is no wave-off or second chance!

My training flights do not allow much time to enjoy soaring about the skies, however, I have had brief experiences of discovering thermal lifts. Thermals are often found over heat-radiating blacktop parking lots, plowed farm fields, or under dark clouds. A variometer in the glider indicates uplifting and descending movement. Normally, in still air, the instrument will show a descent of about 200 feet per minute which if no thermal is found gives you about 15-minutes to enter the 1,000-foot landing pattern.

When finding a thermal and seeing the variometer suddenly register a 300 or 400-foot assent, the pilot immediately rolls into a 45-degree bank trying to stay in the column of uplifting air. One of my flights found a thermal with none of the previous mentioned warm air clues. When I asked the instructor about that, he said look at the birds. Sure enough, there about us were three circling hawks, none of which were flapping their wings. “Do they know to stay out of our way?” I asked.

What a wonderful hobby this is. It costs $30 to be towed aloft. Fuel cost = zero. I love it.