My three sons and I had frequent adventures together during their growing up years. I got a lot of “good-dad” praise for that, but the truth is I did it selfishly. We were doing the things I enjoyed and I was in charge! You don’t have that kind of control with contemporary buddies. One year, Eric and I flew our airplane west as far as Catalina Island off the west coast while enjoying bike riding and camping at our various stops. That same year, Chris and I ran 164-miles across the state of Florida. Brian and I enjoy fishing together. Even as a seven-year-old, I marveled at his patience. After two hours in a boat with nothing biting, I’d suggest we call it a day. “Just five-more minutes, Dad,” Brian would say.

One day I called Brian from my office and said, “Brian, grab the gear, let’s go catch some fish.” And we had a good day hooking several large Bass. Then Brian asked, “Is that it, Dad?”

“Is that it? You fly across the United States with Eric. You run across Florida with Chris. And with me, we go fishing?”

Thinking fast, I said, “No, actually I’m planning a special week with you, Brian. I’m just not ready to announce it yet.”

We ended up flying to Gatlinburg for a week of hiking and amusement park fun in Pigeon Forge.

An annual trip with all three boys was made to Oshkosh, Wisconsin, for the Air Show there. Some years we flew up in our plane and camped under the wing. Other years we drove up and stayed in dorms on the University of Wisconsin, Oshkosh campus. But most years we hauled our camper trailer, then would conclude the week by camping in one of the beautiful Wisconsin state parks.

Knowing young boys could get rowdy during a long week together, I would encourage their good behavior by giving them report cards for helpfulness, cooperation, obedience, etc. I noticed that Chris was pasting those report cards on his bedroom wall over the years and asked him about it. “Heck, he said, those are the best report cards I ever received.”

One of the other tricks I used was to hang a whistle from the rearview mirror in the car. I explained that I expected a certain amount of roughhousing and rowdiness as we traveled, and I could tolerate a certain amount of the bedlam. However, when it got too much, I was going to blow the whistle and expected it to stop immediately. Several times during those drives, the commotion from the back seat would start to increase and I would hear, “Are you about to blow the whistle, Dad?”

“No, not yet, but you’re getting close.”

Guess what? Never on those trips did I ever blow that whistle.

One year at Oshkosh, the four of us purchased Oshkosh B’gosh bib overalls. The boys were about 10, 8, and 5. See the pictures below. We’re all wearing our Star-K hats. 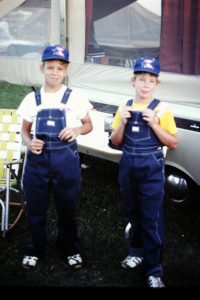 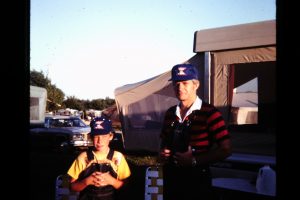 12 thoughts on “My Three Sons”