When my oldest son, Eric, turned 50, Chris, his younger brother told him he was buying the two of them a skydiving experience to celebrate. It would be one of those tandem-jump affairs where the instructor is strapped to your back and controls the freefall, chute opening, and landing. I wasn’t concerned for their safety because, after all, former President George Bush did it as a 90-year-old. I eagerly awaited a report of their jump. “Oh, Dad, you’ve got to do it. It’s unbelievable!”

I admit, it’s one of those things I’ve thought about from time to time. What would it be like to step out of a high-flying airplane with nothing but thousands of feet of air between you and terra firma? Okay. Why not. Let’s do it. But one thing for sure, DON’T TELL MICHELE. She would have a fit. Accuse me of just being a big showoff risking my neck. I wouldn’t hear the end of it. Later, maybe, after she sees I survived.

The jump school in Frankfort, Indiana, is close to Lafayette, home of Purdue University. I rode my motorcycle two hours to Frankfort and found scores of Purdue students waiting their turn to skydive. The briefing was very … well brief. “Sit on the edge of the airplane’s hatchway. I’ll push you out. Tuck your legs back between my legs. When landing, I’ll tell you to extend your legs forward and we’ll slide in on our fannies.” That was it.

Strapped into my harness and waiting our turn to board the jump plane, just to make conversation I asked if there was a reserve chute in his pack. “Oh, yeah,” he says.

“How does that work,” I asked. Then this instructor went into this ten-minute description of how important it was to cut away the tangled main chute and how he had to undo straps, release buckles, unfasten snaps, and finally pull a cord.

“Geeze, did you ever have to do that?”

The plane carried sixteen jumpers, all sitting on two long benches on either side of the aircraft. As one jumper exits, all slide down the bench to take their turn. I had paid a photographer to jump with us and take pictures on the way down. He would leave the plane first and my guy and I were right behind. This picture taken inside the plane seems to suggest I might be having second thoughts.

We jumped at 13,000 feet, 7,000 feet above a scattered layer of clouds. Here’s something I don’t understand. The photographer jumped first. We went next doing a tumbling somersault out the door, and the photographer is right there, floating in space taking our picture. Since he went first why wasn’t he blown away hundreds of feet behind the plane. That’s a mystery to me.

We plummeted through the air at 140 mph. The skin was stretched tight across our faces. The photo guy, all of us freefalling, zoomed in within feet taking hundreds of pictures with a camera attached to his helmet and a shutter release held between his teeth.

It took only twenty seconds or so to fall 7,000 feet to the chute opening altitude. This was where my sons said I was really going to enjoy the ride. “Dad, you can see forever, floating down like a feather.”

What they didn’t tell me about was that sudden stop when the main chute opens. Wham! You go from 140 mph to what seems like nothing in a split second. The jolt is rattling. Unfortunately, the straps that ran up between my legs were not positioned correctly. Oh man! Get me on the ground quickly! 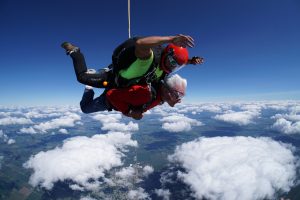 That slide-in landing wasn’t as advertised either. My boys said it would be a nice gentle slide.” Your pants are going to have grass stains, Dad.” Not in my case. We made a dent in the ground. Whomp! When we hit I wondered if I hurt myself. But the photographer, who beat us to the ground, ran over and yanked me to my feet. Standing there, I knew I at least didn’t break anything, but my tailbone was sending signals of distress. Ouch.

The instructor immediately slipped out of his harness and ran toward another jump plane waiting to take off. I surmise he was in a hurry to get on the ground and miscalculated the landing. It had been an jarring arrival. Riding home on my motorcycle, I spent half the time standing on the foot pegs to take pressure off my derriere. Dang! When I got home, I bought one of those inflatable donuts so I could sit comfortably in a chair.

So other than that, and those straps between the legs, how was it? Several days later, I got a card from the jump school offering a $100 special. Nope, I thought. They would have to pay me a hell of lot more than that to do it again. “Why jump out of a perfectly good airplane?” Yeah, fuhgeddaboudit!