In 1962, Tom Fritz and the rest of Navy Preflight Class 28-62 endured the traditional harassment and verbal abuse that is customary when transforming civilians into disciplined, in-step, squared away, military peons. We stumbled around the grinder confusing our left foot with our right when executing “Left Column, March!,” and fumbled with those old M-1 rifles when hearing “Right, Shoulder, Arm!”

Gunnery Sergeant Hoffman would rant and rave, spitting his appalling amazement in our faces that he had never seen such pathetic inability. “On the ground, Maggots. Give me twenty!”

However, the joke was on the sergeant. Tom Fritz had been a former enlisted Marine. He entered the Corps after one year of college, then after his military service returned to college. Following graduation, Tom applied for the Navy’s flight program. “I knew what Preflight was going to be like,” he said. “I knew if the sergeant found out my Marine background, he would expect great things of me and probably push for additional responsibilities. So, I decided to stumble around just like the rest of you greenhorns.” Tom got away with it.

The bonding, camaraderie and teamwork of that Prefight experience got us through it. Following our graduation and commissioning, all my classmates were scattered to the four winds. The Naval Aviation Officers (NAOs), non-pilots because of some limitation—generally less than 20/20 vision—would become bombardier/navigators and entered a different training syllabus. Even the future pilots were shipped off the different bases depending on whether they would be flying helicopters, jets, or multi-engine aircraft.

Tom and I didn’t meet again until three years after Preflight. I was assigned to VP-21, based at Naval Air Station Brunswick, Maine. I flew the large P2V7, Neptune, a patrol aircraft with a crew of twelve, searching for Soviet Submarines. Tom, a very bright guy to begin with, was flying as part of a Naval Intelligence Squadron.

One day unannounced, Tom’s aircrew landed in Brunswick in their unmarked P-3, Orion, aircraft and reported to VP-10, one of my sister squadrons in Brunswick. Tom told the Commanding Officer of VP-10 they were on a two-week secret exercise and would like his squadron to paint their aircraft like others in the squadron, and provide powerplant, hydraulic and electrical servicing. But he also added, under no circumstances was anyone to go inside their aircraft. The CO of VP-10 pledged full support.

Tom and I renewed our friendship over a few drinks at the Officer’s Club, but I learned nothing about his mission in Brunswick.

At the end of Tom’s two weeks, he called on the VP-10 commanding officer to thank him for his services. The CO said, “Glad to help. And actually, it’s probably a good time for you to depart because we have our ORI coming up next week.”

An ORI is an Operational Readiness Inspection. It’s an annual test given to ships, squadrons, and combat units, simulating wartime conditions in which they are evaluated regarding their readiness to perform their mission. It’s a big deal. The five-day ORI for a patrol squadron involved laying mines, firing rockets. Dropping bombs and searching for submarines. Squadron spaces would be secured and ground personnel were tested responding to simulated enemy infiltration and medical emergencies.

Tom said, “Captain, we really appreciate your support these past weeks. Would it help your ORI grade if you located actual Soviet subs during your flight operations?”

“It certainly would,” replied the skipper.

“Okay, here’s what you do. Next Wednesday between the hours of 1400 and 1600 have an aircraft on patrol near the eastern edge of George’s Bank. I’ll give you the exact latitude and longitude. Remain passive and undetected by staying at altitude, within the clouds if possible. Two Russian submarines will be sitting on the bottom, not moving, but will start communicating with each other. The communication will be plain language, but in Russian of course. Record what you hear. Their messages won’t have any strategic value—they use encrypted code for that—but they’ll talk about the kind of things our guys talk about, weather, sports, and women. I’ll give you some special sonobuoys to pick up voice communication. We already have several hours of these conversations, but I bet it will blow the socks off your ORI inspectors.

Needless to say, VP-10s skipper about wet his pants when getting this information.

I found it interesting that while we were flying 12 and 14-hour patrols across thousands of miles of ocean, hoping to run across a Russki, Navy Intelligence probably knew where 60% of their submarines were within a mile of two.

Tom Fritz spent 36 years in the Navy rising to the rank of Captain. He had several command tours, including the position as Deputy of Naval Intelligence. Sixteen years ago, Tom was diagnosed with lymphoma cancer which the VA attributed to his time in Vietnam. Tom was under the care of the Bethesda Naval Hospital and underwent experimental drug trails. Tom’s challenge to his doctors was, “Hey, keep me alive. I’m making you guys look good.”

To survive a stage four cancer diagnosis for 16 years was miraculous. Tom and his wife Janie lived just a short distance for our winter retreat in Florida. I had several visits with them over the years and feel convinced it was Tom’s courage, determination, positive attitude, and sense of humor that was keeping him alive.

Tom died in 2013. Three other Prefight classmates and I attended the funeral and burial with full military honors in Arlington National Cemetery. The leaded, overcast skies that day in Washington seemed an appropriate background for the thousands of white headstones that seemed to disappear in the mist blanketing the gently rolling hills of Arlington.

Following a short but poignant chapel service, Tom’s remains were loaded and transported to the gravesite on a two-wheeled caisson pulled by seven black horses. It was followed by a 50-member escort platoon of Navy white hats and a 12-member Navy band. At the grave, after words by the Navy Chaplin, three volleys of rifle fire from a nearby hill shattered the hush of the ceremony followed by a bugler playing the mournful, haunting taps. 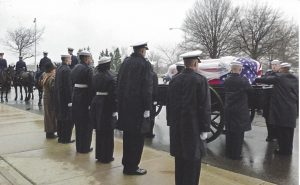 A casket team folded the American flag draping the casket. Each slow, precise, almost mechanical smoothing and tucking of the twelve folds of the flag is a traditional tribute to eternal life, honor, remembrance, trust in God, country, and allegiance. The officer-in-charge presented the folded, triangular flag to Janie, Tom’s widow, sitting bravely, ramrod straight, clutching a bouquet of roses, with the words, “On behalf of the President of the United States …”

I could hardly breathe the emotion and dignity of the ceremony was so overwhelming.

Day is done, gone the sun, from the lakes,

From the hills, from the sky,

All is well, safely rest,