Some people are terrified about having to give a speech before a group. I can understand that because even in high school, I found it was a struggle when having to give a talk. I would stutter, stammer, and nervously sweat bullets. But I got over it. I have Toastmasters to thank for that. Toastmasters is a speaker’s club in which you stand in front of club members and give planned and impromptu talks. A real turning point for me was when we videotaped a meeting. Seeing myself speaking, even though I was nervous and sweating those bullets, hey, I thought I looked and sounded pretty good!

With my new-found confidence, I started seeking speaking opportunities. As president of our Rotary Club and being involved in my community’s Chamber of Commerce Board provided numerous speaking occasions.

When folks ask about my hobbies, I tell them my favorite is “pretending to be an author.” Some of the things real authors do that I enjoy are book signings and giving talks about their books. My friends challenge that saying, “Hey, you are an author.” Yeah, kinda. I have self-published three books. Anyone can self-publish a book. However, the subjects of those books; flying airplanes, sailing boats, running marathons, adventures on a motorcycle, and American history, seem to have broad interest. I am a former Navy flyer. One of my books is about my military adventures. I have jokingly said, there are so many airplane enthusiasts/nuts in the world, all you have to do is put the picture of an airplane on the cover of a book and even if it had blank pages, it would be a best seller. Not really true, of course, but I have found aviation groups, military organizations, Rotary clubs, and others are happy to schedule a program to hear stories from my Navy book. I have given over 60 talks on that subject alone.

All of my programs are given free of charge of course, but I also sell signed copies of my books after speaking. I find that I can generally sell books to 20—25% of the audience attending the talks. A group of 60 people will give me $200 or so that more than covers my expenses, not to mention the free meal and perhaps a coffee cup memento or certificate of appreciation. Love those coffee cups!

A memorable exception to those financially minor affairs was my invitation to speak before the Wardroom Club in Boston, Mass. A club that was first organized in 1899. One of my former squadron mates was a member and recommended I be invited to speak. The visit included roundtrip airfare for my wife and me from Indiana and two nights in a first-class Boston hotel.

The club was mostly made up of former senior officers of the maritime services—Navy, Marine, Coast Guard, and Merchant Marine.

That evening before the program started, a retired Admiral approached me shuffling behind his walker and said, “Jim, I always wanted to fly an airplane, but the Navy gave me a damn battleship instead.”

At the start of the program, first all the flag officers—Generals and Admirals—were introduced. Several stood and acknowledged the recognition. Then the Medal of Honor recipients were introduced. Two stood. Then I was introduced. Holy cow, I’m thinking, Stark you are out of your league!

I’ve met some interesting folks while giving my programs. Prior to a talk in Florida to a military officer’s association, the widow of former Air Force General was introduced. She was sitting near the front of the room and I could tell during my remarks that she was enjoying the stories, particularly the one I told about how I was jumped by Soviet MiGs while flying a patrol during the Cuban Missile Crisis. Our fanny was saved by two Air Force F-4 Phantom jets that came to our rescue. The Air Force widow began silently clapping her hands hearing that story. After my talk, I commented to the lady that I had noticed her reaction.

“Yes,” she said, my husband was flying Phantoms during the Cuban Crisis.” How about that!

A talk I gave in Terre Haute after a WW II reenactment, afterwards resulted in a line of buyers for signed copies of my book. As so often happens, a gentleman in line wanted to tell me his story. After listening for several minutes about his travels in his Airstream trailer, I rudely interrupted, “Sir, do you want to buy a book, or not?”

“Well, I’ll tell you what,” I replied. “The next time you’re camping nearby in that trailer of yours, call me and I’ll come and sell you a book and read it to you.”

Guess what? Four weeks later I got a call from this guy who was camping near Lake Monroe. He said, “I have 20 campers here that would like to hear stories from your book.” That night sitting around a campfire with my laptop, I did a PowerPoint presentation of stories from my Navy days … and sold five books.

Invited to be the keynote speaker at the Amhurst, Ohio, Veterans Tribute on Veterans Day, 2019, put me in front of several hundred folks. A State Representative attending that day, bought my Navy book and later sent me a letter of appreciation. Turns out his wife is a high school English teacher. I sent her my Great Lakes Skipper book about the early settling of Cleveland, Ohio, the War of 1812, the Underground Railroad, and shipwreck history on the Great Lakes. She has made my books optional reading choices for her English students. 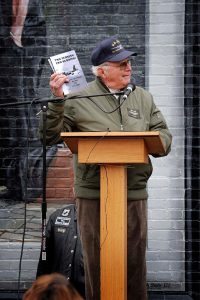 My largest audience was 2,500 graduates in 1992 at the IVY Tech regional graduation held in the Little Opry auditorium in Nashville, IN. A member of the IVY Tech board was in my Rotary club and asked me to give the commencement address. Having led Strategic Planning efforts in my company, I used that process as the subject of my talk, “The Magic of Goal Setting.” The goal setting steps involve creating a mission statement (M), setting a goal (G), establishing objectives (O), deciding on a strategy (S), and listing your tactics (T). I told the graduates they could remember the five steps by remembering the mnemonic, My Graduation Offers Super Tomorrows.

Each step refined the broader mission statement. For example, if one’s Mission was to have their family enjoy a comfortable lifestyle with income adequate to support occasional frivolous expenditures, the next move was to name a Goal which might mean achieving financial independence. The following step is naming an Objective which might specify a level $$$ of assets. Next is defining a Strategy which might be enrolling in a class on investments. And finally, is Tactics and that might include 1) calling a friend whose father is a stockbroker and getting his advice on classes to attend. 2) Or going to the library to check out books on the subject, or 3) to write to different investment schools. The magic occurs whenever this process is decided upon and written down.

Example of the magic: One of my Goals was—To own and ride a motorcycle. The next day a company employee noticed a motorcycle for sale that looked like a good buy. I ended up buying it. Wow, how did that happen?

WARNING – HERE’S’s A  COMMERCIAL: Need a speaker for your club or organization? Call me. I’m available and cheap—but may bring books to sell.