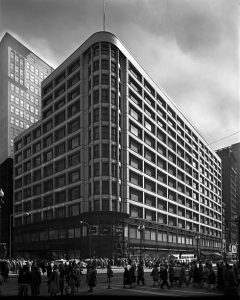 As a college student approaching the end of my school years and looking forward to a career—whatever it would be—I learned my school, North Central College, had Co-Op arrangements with several corporations in which students could enter fulltime training programs while still earning college credits. Most were with manufacturing firms, but also included was the premier Chicago department store, Carson, Pirie, Scott, and Company. The Carson’s opportunity appealed to me since I had worked in a retail men’s store back home during summers and Christmas holidays.

I told the dean of our school’s commerce department of my interest and plans were discussed for me to spend the second semester of my Junior year working at Carson’s in Chicago. The professor was not a well man. He occasionally suffered mild epileptic fits during class. We students learned that during those disquieting episodes we were to notify the office and then happily headed off to the student union for an excused class cut and coffee.

The professor supposedly made the arrangements with Carsons and I was to start early in January, 1961. Since I had a Football scholarship, I needed to get permission from my football coach to miss spring football practice. He wasn’t happy about it but as long as I promised to be back on campus in time for the early fall practice next season, he gave me his blessing and continued my scholarship.

During that Christmas holiday break, I rented an apartment in Chicago. As a single guy with his own pad living in Hugh Heffner’s (Playboy Magazine founder) hometown, I was excited.

Walking into Carsons’ huge flagship store on State Street that day in January, I assumed I needed to find the human resources office to learn about my responsibilities. I can’t remember the exact conversation that took place so many years ago, but when I announced my name as the co-op student from North Central College, it didn’t evoke any recognition. Finally ending up in front of the VP of HR, it was speculated the co-op plan must have been arranged through Carson’s corporate office and word hadn’t been passed down to HR.  Fortunately, the store had a new group of college graduate hires just starting its Executive Training Program the following week. I would be assigned to the men’s wear department and included in the training program.

I was briefly introduced to Mr. Gordon Ransford, Vice President of Carson’s Men’s Wear. We hit it off immediately, primarily because Mr. Ransford had played football at Augustana College, a school in the same conference as North Central.

My immediate boss would be the buyer of men’s neckwear. I was referred to as her assistant manager. Men’s neckwear in the downtown store was a big deal. We had six salespeople selling men’s neckties. Sales were generally around $8,000 a day. At noon every day, our counters were covered with specially priced neckwear in anticipation of the luncheon crowd of businesspeople flooding through our street-level department on their way to one of the store’s several restaurants and cafeterias. 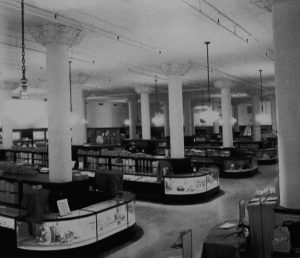 George was our best salesman. He outsold all other salespeople three to one. George violated every rule I’d ever learned about salesmanship. His technique was to fly across the department floor, grab product out of customer’s hands, saying, “I’ll ring that up over here, mister.” If George had a day off, sales would be down close to $3,000.

George took me to dinner one night and told me about his first job in Chicago. He had been a waiter at the famous Chicago hotel, the Drake. He said he was working there the day he was married. Rushing to get his tables cleared so he could get home to his new bride, the host of a large dinner party stood up in protest to complain about the hurried service. George apologized and explained the reason for his rushing. The host understood and in a surprisingly gracious act, passed an empty water glass around the table for all guests to stuff with dollar bills. George said that was so great, he told that story every night from then on.

The Heather House was Carson’s posh restaurant on the eighth floor. Once a week Carsons put on a fashion show in the restaurant for the patrons. John Anderson, a fellow trainee and I were asked to model men’s clothing. That was a great gig getting us off the sales floor for an hour or two. And that led to other Carson’s sponsored modeling events as well. The Ravinia Music Festival is the oldest outdoor music festival in the United States. It is held in Ravinia Park during the summer. The kickoff each spring was a televised promotion sponsored by Carson’s. John and I modeled men’s fashions along with a bevy of lovely professional female models. The gal models were paid hundreds of dollars. John and I got the afternoon off and the fun of being on television.

Our biggest modeling assignment was at the International Boat Show held at McCormick Place. John and I posed on a sailboat surrounded by a dozen bikini clad lovelies. Our picture appeared in the Chicago Tribune the following day.  The newspaper did not mention that minutes after that picture was taken, the sailboat toppled off it cradle dumping our crew onto the McCormick floor amid a pile of sailor hats, pedal pushers and bikinis.  No injuries occurred.

One day my professor from North Central appeared in the store after I had been at Carson’s about five months. “Just checking up on you, Jim,” he said. “Who is your boss?” Caught off guard, I told him, Mr. Ransford was VP of the Men’s Department. And off he headed for the elevators to take him to the corporate offices on the tenth floor.

Ten minutes after that, Mr. Ransford showed up. “Who the hell was that guy?” he asked.

“That was my college professor, dean of North Central’s commence department. He’s the one who arranged my co-op program.”

“What? You’re a college student? Not a full-time employee?”

A lengthy conversation followed during which Mr. Ransford said some very nice things about my regard by other department heads at Carsons. He said he hoped I would consider returning after graduation. In the meantime, he said when back at school, if I had interest in parttime work at their satellite store near my school, he would be pleased to make the arrangements.

Then he said, “North Central plays Augustana on the gridiron on October 15th. I’ll be in the stands cheering for you,” and then with a wink added, “I hope your team comes close to winning.”