My middle name is Frederick. That was my grandmother’s family name on my father’s side. Grandmother had three brothers. Her brother Vard and his wife Beryl had two sons, one of them named Robert R. Frederick (Bob). My dad, his brother Paul, and cousin Bob were good friends. Bob graduated from DePauw University and has been a member of the Board of Trustees at DePauw since 1974.

It was partially through my dad’s influence that Bob’s first job was with General Electric. Bob was a bright guy and rose to the top at GE in just a few years. He became Executive Vice President of GE during the Jack Welch years. He and Welch didn’t always see eye-to-eye. That problem was solved in 1982 when Bob was recruited by RCA to take the reins as it’s President and CEO. 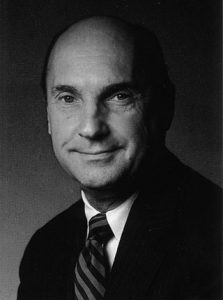 Bob always made weekly telephone calls to his mother, Beryl, who in 1982 was in her 90s and living in Elkhart, IN. My dad’s brother, Paul, told me of the conversation when Bob called and told about his new position.

After a pause, Beryl, replied, “Hmmm, don’t they make those Victrolas?”

“Well, yeah, and other things.”

“What are you doing with them, Bob?”

Another long pause, “Bob, are you in over your head?”

RCA had great success under Bob leadership, RCA’s earnings catapulted to eight times what they were in 1981. But lo and behold, after only a short time RCA merged with General Electric. So, Bob Frederick was once again in camp with Jack Welch.

At their first meeting, Welch wondered what role Bob should now play with GE. It was decided that since Bob was on seven corporate boards, various hospital boards, and several national and international business councils that he would continue on those boards as a representative of General Electric. The GE perks would include paying for an apartment in Manhattan and use of the GE aircraft for travel to the various board meetings.

Welch’s only question was “How long should we continue that plan?”

Bob’s replied was, “Why don’t we continue it until I don’t want to do it anymore.”

Bob is now in his 90s, living in Florida and still owns homes in New Canaan, Connecticut, Boca Grande, Florida, and on Walloon Lake, Michigan. In a recent delightfully humorous self-typed letter to me, said he has kept those properties as magnets to attract the grandkids and great-grandkids. His final thoughts in the letter said: “Now that I have turned 94, I’m not drinking any more. But then, I really must confess, I’m not drinking any less. Bottoms up. Bob”