One of the days my wife and I spent motorcycling around Halifax, Nova Scotia, included a visit to the Halifax Museum. Halifax has connections to two devastating disasters, one is well known, but the other of even greater magnitude is not widely recognized. The one more familiar was the sinking of the Titanic in 1912.

The Titanic, the largest and fastest passenger ship of its time was on its maiden voyage when it struck an iceberg 350 miles south of Newfoundland, Canada, on April 12, 1912. The ship, short of lifeboats for all passengers, went to the bottom drowning 1,517 passengers and crew. Rescue ships from Halifax searched the area of the disaster, recovering bodies and tons of ship’s debris and passenger’s person effects.  One hundred and fifty of the 337 bodies recovered from the sinking were buried in Halifax cemeteries. One of the bodies, a boiler room crew member by the name of Jack Dawson is buried there. Jack loaned his name to the fictional character played by Leonardo DiCaprio in the movie “Titanic.” Dawson’s cemetery plot is covered with flower bouquets and teddy bears, placed there by young DiCaprio movie fans. Many personal items of the victims are displayed in the Halifax Museum. One of the sad items is a child’s tiny shoe.

An event of even greater death and destruction occurred in Halifax five years later in 1917. In December that year, ships were assembling in Halifax Harbor to convoy across the Atlantic in support of their allies during World War One.

There are actually two adjacent harbors in Halifax separated by a short waterway known as the Narrows. Ships passing each other in the Narrows must carefully adhere to the rules of the road and pass each other cautiously to the starboard (right) side.

A French munitions ship, the Mont Blanc, carrying highly flammable Benzene and tons of TNT was entering the Narrows on the proper side. A Belgian Relief ship, the IMO, with food and supplies destined for war torn Belgian, was entering the Narrows from the opposite direction but to avoid a small freighter moved to the same side as the approaching Mont Blanc. Both ships were on a head-on course for a collision. The captain of the Mont Blanc, attempting to avoid the accident, made an immediate course change, cutting across the bow of the IMO. The IMO reversed its propellers, but it was too late, and the ships collided. The Benzene on the deck of the Mont Blanc, stacked in barrels several feet high, burst into a raging fire. The ship, now out of control, drifted into the piers and docks on the Halifax side of the Narrows and sent them afire.

The time was 9 AM on a Thursday morning and the city of Halifax was hustling about to settle into the day’s activities. School children were at their desks in school, downtown shops were opening, and businesspeople were moving into their offices. When the ships collided and the fires erupted, citizens ran to windows and roof tops to witness the burning. Twenty-one minutes after the fires ignited, The Mont Blanc’s TNT exploded. The earth-shaking blast was equal to that of the atom bombs dropped on Japan 28-years later. A huge wave washed to shore wiping away docks and wharfs before flooding the streets of the city carrying off buildings, people, horses, and wagons. Large steam locomotives were upended in railroad yards and tossed aside like toys. Rocks were torn from the bottom of Halifax harbor and thrown into the air. Pieces of the exploded ship were found two miles away. Several square miles of Halifax homes and buildings simply disappeared. No home in Halifax was spared damage. Victims had their clothing stripped from their bodies in the explosion. It was estimated 3,000 people died with another 9,000 maimed and seriously injured. Survivors outside the blast area rushed in to help and found the streets littered with corpses and bodies, some headless, hanging from telegraph wires. Doctors, many used to gruesome injuries, claimed never to have seen such horrific wounds. Many victims were never found. It was Canada’s most destructive disaster.

The Halifax Museum had hundreds of photographs of the destruction. They reminded me of photos I have seen of Hiroshima and Nagasaki after their bombings. 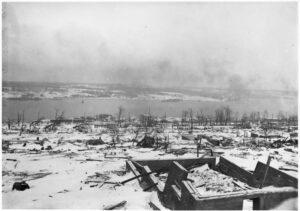 Physically, Halifax recovered. Aid from Great Britain, United States and all parts of Canada poured into Halifax. Nova Scotians are a hardy lot. Today it is a beautiful modern city with thousands of happy, smiling citizens. We enjoyed our visit to that fascinating providence but were aghast at its tragic history.