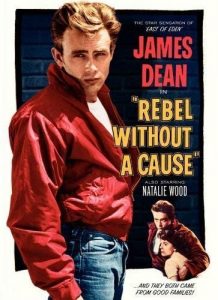 It was 1955. Jim Stark came from a good family, but he was a “rebel without a cause,” at least according to the poster in the theater’s display window. That movie made me famous among my seventeen-year-old high school friends. That poster had a place of honor on my bedroom wall.

I wasn’t really a rebel. The true rebels wore peg pants and had hair slicked back with copious amounts of Vitalis hair oil. We called them “greasers.” Or, since many drove around in cars with a pair of angora dice hanging from rearview mirrors, they were also known as “Hairy Dicers.”

Going steady was noted by giving a girl your class ring which was either hung on a string around her neck or made to fit her finger by wrapping it with yarn. Your letter sweater draped over a girl’s shoulders also claimed her as your steady.

Our middle-class lives were marked by stay-at-home mom’s, most of whom now, after the Depression era ’30s and war years of the ‘40s, had the conveniences of washing machines, dish washers, and a variety of portable appliances. Fathers went to work in a double-breasted suits and fedora hats, but somehow most of us were never quite like those perfect families on TV like “Father Knows Best” or “Leave it to Beaver.”

Girls wore poodle skirts to our sock hops where the kids took off their shoes to dance on the polished gym floor. We danced and made out in parked cars listening to “Mr. Sandman” by the Chordettes or “Sincerely” by the McGuire Sisters. There was a new beat starting about this time called Rock N Roll introduced by a Allen Freed on his syndicated radio show out of New York. Freed got our toes tapping and fingers snapping with “Rock Around the Clock” and that new guy, Elvis, with his “Heartbreak Hotel.”

Almost as electrifying as sex for a seventeen-year-old were those exciting new cars. A ’55 Chevy or Olds 88 could make your heart race. And that’s not to even mention those really cool Thunderbirds or Corvettes. Of course, new cars were out of reach for a teenager, so we acquired old Fords or Chevys and customized them with frenched headlights, dual exhaust, chopped tops, and channeled bodies. The ’40 Ford coup I bought for $150 was souped-up by replacing its original engine with a ’50 Mercury motor I bought from a junk yard for $50. We did the work in my friend’s backyard, pulling out the old engine and dropping in the new with a chain hoist hung from a tree limb.

Drag racing, smoking cigarettes, and a stolen six-pack were the sins of the day. How did I ever survive those reckless, irresponsible, foolish, … and memorable teenage years? What were your teenage memories?